Legendary producer John Fryer, known primarily for his contributions to This Mortal Coil (as well as his work with Fad Gadget, Depeche Mode, the Cocteau Twins, Nine Inch Nails, and Stabbing Westward among many others), introduces us to his latest project Black Needle Noise with a collection of dark and ear-grabbing covers from his most recent release These Mortal Covers.

A handful of collaborations bring a new and inviting sound to each rendition of familiar classics from many different genres. The album starts with an impactful and heavy rendition of Nancy Sinatra’s “Bang Bang” (featuring Dr. Strangefryer), bringing industrial undertones and soft melancholy harmonies, which set the tone of unpredictability and excitement  for the rest of the album. 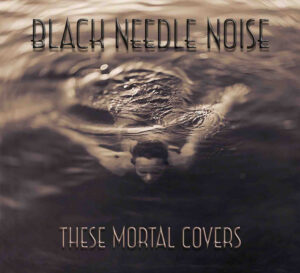 Throughout this album, there is a notable emphasis on heavy sonic elements, creating  a raw and seductive energy  in songs such as “I know What Boys Like” and “She Talks To Angels.” Many of the song structures project a more chaotic and unpredictable aspect, which can be heard clearly in “Black Magic,” featuring Anjela Piccard on vocals which are very dominant in the mix. Her delivery is controlled yet still projects an air of rebellion.

As well as amplifying the distortion and grittiness, other songs have been stripped down from their traditional connotations, isolating the lyrics and giving the listener an impression which ranges from solemn to ethereal. Tom Berger’s contribution to “What a Wonderful World” sets a gothic mood  while Piccard’s haunting take on “Love Don’t Live Here Anymore” removes the joyfulness of the original and replaces it with grief and sorrow. Pinky Turzo’s “Changes” embodies and empowers the existential journey, while also  paralyzing us with the fragility of her delivery on “Let This Be The Night.”

Fryer effortlessly maintains the traditional structure and feel of the original songs while still creating his own impact. The brooding yet inviting rendition of ‘”Walking In My Shoes” maintains the signature Depeche Mode style while embodying a more desolated and alluring twist. Rebecca Coseboom keeps this element in a dreamy yet groovy rework of “Losing My Religion,” maintaining the feel we are accustomed to from Michael Stipe, yet still making this her own.

The richer and darker visions of this album allow each song to be heard in a new way, and we  hear the influences of Fryer’s many collaborations within them. Painting an ambient driven sense of magic from the start to the end, These Mortal Covers leave us  hungry for more indulgence of madness and darkness. With over 40 years of experience of perfecting his signature sound, Black Needle Noise is a project which must not go undiscovered. This album lives up to that legacy and is a must-listen.

These Mortal Covers is out now via Cleopatra Records on Bandcamp, Spotify, and the Black Needle Noise website.