March the 14th 2016 was the last day of the Front Line Assembly European tour. I am more than happy to have caught them twice: in Obernhausen, Germany, at E-tropolis festival and at their London gig at The Garage. This was the third time I have seen them live, but you can never get enough of that brilliant band, as they simply cannot leave you disappointed.
As I arrived to The Garage pretty late, just some 10 minutes before their gig, I missed the other bands, but I had only one desire, some more of the FLA “flavour”!
The stage was getting ready, the venue was pretty dim and I expected the place to be a bit more crowded, but just before the start, people gathered and I assume there were maybe some 400-500 souls there who came, just as me, to get hypnotised!
Even though I intended to stay at the back as this time I had no camera, it was simply impossible, so I made my way to the front very rudely and ended up at the front row trying to catch a photo or two with my mobile, but more importantly- to jump and dance! 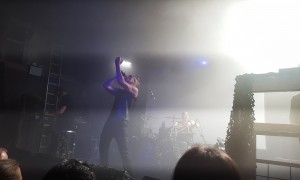 As Leeb appeared on the stage I noticed he was in a good mood, and the smaller venue gave a more intimate experience; the band really connected with the crowd. The atmosphere at the Festival was a bit colder compared to the London one. But the band gave their best last night, and seemed they saved the last atoms of strength and love for this last gig of their tour. I thank them for that!
While I did not expect was them making an intro with “The Chair” from Caustic Grip; it was very dim as they started getting on the stage. Being at the back of the venue while they played “Final Impact” would simply not do! By “Neologic Spasm” I had no choice but to make my way to the front as you cannot be idle when attending the FLA gig, no way!

After “Blood”, which is one of my personal favourites from Echogenetic, I thought “Ok, I am in heaven!”. I did not look at the people around me; the song kept me busy with singing along and feeling every second of their emotional performance deep in my veins. I hoped they would play “Deadened” as a must dance hit of mine, and I was not wrong, they did, but just before, they went back in time again to play “Resist” and “Plasticity”, making my feet suffer, but my soul bloom. Maybe their feet hurt too but no stopping, no slowing down; Leeb and the guys were giving it all to the London crowd! I really felt one very intimate connection, as this was the smallest stage I have seen them at, and you could feel that the band functions better in the smaller venue. I was so glad that they played 5 tracks from Echogenetic in total and was glad to see the fans are really up to date with their last album, not clinging only to their old materials. Leeb gave quite an emotional performance of “Exhale”, and as it is a bit more melodic in the chorus, giving the crowd once again the opportunity to sing along with Leeb. I think this was the most emotional moment of the London gig. I don’t know if it was because of the song itself, but Leeb showed a lot of emotion while performing it; I could not miss noticing there was some special vibe from the stage. It made not the “final” but a fatal impact on me last night; pun intended! 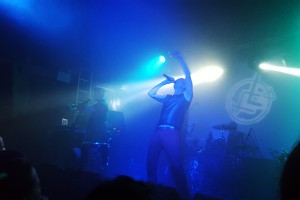 “Prophecy” was as I remember the only song from Implode and it was a nice surprise they included that one in the set list. As they played the last song, which was “Mental Distortion” they decided to call it a day. But they could, however, not ignore the standing ovation. The applause continued after they have retreated from the stage and the band simply had to come back for the encore. They chose “Ghosts” from Echogenetic and left one ultimate hit of theirs for the finale, and who can resist “Mindphaser”? I cannot forget how motivating Bill was, his communication with the crowd was great, cheering us all, making us hold our hands in the air, clapping in rhythm; it seemed that the whole band was in a very good mood. I just hope the band was getting a feedback from us, as I was too preoccupied with my own thrill to see what others were doing; hopefully jumping around too!
Leeb thanked the audience, not forgetting to mention that London is very close to the hearts of Rhys and himself, and I hope so too, wishing them back soon, as you can never get enough of FLA! I hope the guys returned home safely and that we won’t wait too long to see them again.
And btw, congrats to those who caught Fulber’s drumsticks. 😉