Whenever I get the opportunity to hear something fresh and original, I instantly feel inspired to spread the word. Kanga’s debut album was just released on 18 November. I was wondering what “industrial but not” or “heavy pop” would stand for. And indeed, those two descriptions undoubtedly come very close to what I have heard. Kanga shows powerful and strong attitude, but in a sensual way and with a dark twist to it. 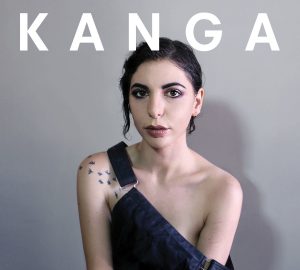 You can get hooked on the sensuality and the seductiveness from the very first track “Something Dangerous”. But the overall feel contains something more, something almost obscure and macabre wrapped in the pop cellophane. After an almost hypnotising introduction, “Going Red” sounds just a pinch wilder. But not less seductive. The chorus flirts heavily with the pop idea. The artist successfully combines “alternative” music genres’ influences with the mainstream. Perfect combination that appeals to the audiences of both. Kanga is very danceable and continues her seductiveness with “Honey”. However, this track is heavier and plays with the industrial music influences, while keeping the catchy chorus. She goes even rawer on “Viciousness” and it feels like Kanga is slowly unveiling herself bit by bit.

She slowed down the pace just when I thought she would, but she kept the powerful raw feeling. “Saviour” relies heavily on the beat and it is more atmospheric and minimalistic, leaving the space for Kanga’s voice to lead the way through.

On the second half of the album Kanga keeps showing us what this album is all about: the ultimate seduction created by the sound and the voice. Heavy flirtation with pop can be heard on “Vital Signs”, which makes it a perfect track for some synth-pop fans as well. Wonderful melancholic and ethereal soundscape awaits you with “Tension”, a personal favourite of mine. Kanga has finally shown her softer and more emotional side. And just when I thought I had found my favourite, I found that she had kept one gem for the last track. “Machine” is a cleverly thought out song both rhythmically and soundwise. I like its experimental feel and I would say that this one is the closest to the meaning of the industrial music. As it reaches the finish, “Machine” gets less atmospheric and more hypnotic, even psychedelic. If this album had to close my year, I would say it was a good year because discovering this truly talented author seems like a perfect Christmas gift.