Among more recent names, Rroyce is definitely worth checking out. After seeing them live at Infest Festival this year, I decided to listen to their music more thoroughly. I took the opportunity to review their second album Karoshi. I wondered about the album title and found the interesting meaning behind it. Karoshi in Japanese means “death by overwork”. The term’s been in use since the 70s to refer to the increasing number of people suffering from fatal strokes and heart attacks attributed to overwork. The band chose the title to illustrate their own personal struggles between their music careers, personal lives and regular jobs. Their sound has been described as synth-pop, electro-pop and wave-pop and I would agree with all three terms. They are utterly melodic and the synth arrangements combined with the guitar are beautifully crafted. 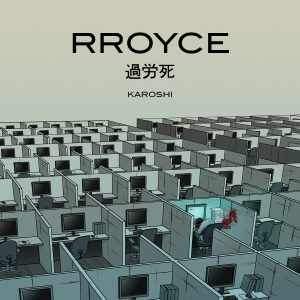 Karoshi offers ten tracks, most of which have a hit quality. The songs are emotionally painted and even without understanding the lyrics, one can feel their emotional potential. What astounds me is Casi’s voice, which is quite distinctive. It doesn’t matter if the track is up-tempo or slower one, Casi’s vocal performance is equally passionate and expressive. The variety of the songs on the album is cleverly presented. By alternating between up-tempo and slower tracks they show the diversity and potential of their material and will keep you curious until the very last track. They open with “The Principle of Grace”, the song that shows you what the band and the album are all about from the start; melodic synth-pop with a lot of attitude. This track proves the guys know really well how to make a synth-pop dance floor hit with a catchy melody. Although it sounds uplifting, the song can leave you with a melancholic feel. They continue in a similar manner with “Who Needs”. They again provide a memorable melody, great arrangements and dance vibe. They only seem to try cooling it down a bit on “(It Smells Like) War”, but they are far from making it softer. Although the song is slower, it shows a lot of character and again the cleverly made and memorable chorus. So far, we already have three hits on this release. They decide to offer a bit of a different sound on “The Dying of your Pride”, “Siamese Dreaming” and “Pyroclastic Flow”. The mentioned tracks sound darker and heavier, more melancholic and emotional. We can clearly hear that Casi’s vocal plays the important role of a story teller. They bounce back with the dance sound on “Running with the Sheep”. There is a touch of Depeche Mode at moments on “One Two Three Four”, but only until the refrain, which is again so characteristic for Rroyce. By now, we know the guys are masters of melodic refrains. We can hear the further validation of that on the very next track, which is one of my favourites: “I like it when you lie”. They choose to close the story of Karoshi with an utterly melodic and emotive song “You don’t belong here”. Although Rroyce doesn’t impose any opinion upon the listeners, we can find a clear message within “You don’t belong here”. If you listen to the lyrics, you will hear them speaking about the problems of homophobia, racism or nationalism. However, I know where Rroyce belong. On the synth-pop sky as one more bright and shiny star.