How is it possible to write about Bowie? As I am quite sure no one is interested in my thoughts, who am I to speak about him? Maybe just one of so many thousands of us who will treasure the memory of him forever. We were not a part of his life, but he was a part of ours; it meant no less  that we didn’t know him, but at the same time we knew what he wanted us to see and that is what matters. In that way he came to each and every one of us.
So when and how did Bowie exactly come to me? I can’t even remember, but I would like to remember that moment now. It was at some point in time when I was still a child, as I was raised by parents who were musicians and my older brother, also a musician who always brought home a lot of records. It had to be then, as I soaked in a lot of musical influences from my father,  a jazz player, mother, an opera singer, and brother, pretty much anything from punk, metal, new wave etc… I was born in 1976, but have been learning their language since I could crawl, so Bowie must have happened to me then. I have no memory of the song or the album, I just know if you have so much love for music in you, Bowie has happened to you too. 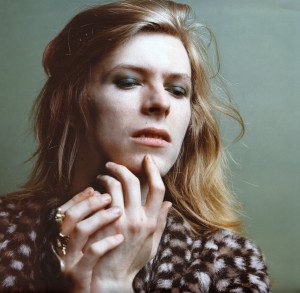 Of course at that time of my early childhood Bowie was already in his ’80s music era so I was first introduced to his new wave and pop work, and as much as I liked whatever he did since then, I in fact became obsessed with all of his ’70s work. As someone who has read books, watched every single documentary or interview with Bowie, I decided to drop all that has been written or filmed about him and let him speak to me only through his work. I didn’t care they called him a plagiarist, a user, a sponge for someone else’s ideas, ditching his fellow musicians when they were no longer useful to him, a 56 kilos fucker addict, taking lines from the books he never actually read… all that was said… all that can be served to you. But I don’t care if he did anything except him being himself, as he had the drive and the vision of what he wanted to be, for a long time before he became Bowie, or Ziggy or Thin White Duke or simply A ROCK GOD. You must have that determination that makes you commit a “Rock ‘n’ Roll Suicide” and kill Ziggy at Hammersmith Odeon show (even if that means hurting the people in your band who didn’t have a clue), as he did that when the time was right, not waiting for Ziggy to die off on his own, but at the peak of his popularity. And he moved on, showing the world another face, one of many he had in him, and it is an art to manage them all without seriously hurting yourself. Even if he did pop up at the Blitz for the inspiration for “Ashes to Ashes”, many could have done it, so why didn’t they? It was again Bowie! What Bowie did was always sensing the world, he was like an antenna for the vibrations of the world, channelling them through his mind and spirit and as a result, we have his music legacy today. He was many things, a diverse artist, but all the facts about him, you can easily find on the internet, I am not here to speak about the obvious facts. Of course I liked and admired many other artists, but he always had his place, a private lodge in my heart and mind, and will continue to do so.
It was the first time I cried for Bowie at the “David Bowie Is” exhibition at the V&A museum in London. The exhibition featured more than 300 objects: his costumes, handwritten lyrics, instruments, photos… even his cocaine spoon. I saw “Ziggy”, “Starman”, “Life on Mars”, “Blue Jean”, “Thin White Duke”, “Labyrinth”, “Earthling” and so many other costumes he kept throughout all these years and his handwritten lyrics and stood in front of every displayed object in disbelief there was a part of Bowie history in front of me. I was well, up to a point. As I walked from one room to another, I remember I entered the room and at that second “Life on Mars” started playing on the headphones and there it was… the suit… Something heavy hit me like a sledge hammer, but there were people around me, I lost my friend in the crowd, but I was ashamed he would see me cry… but I did. You could see by the size of the suits how skinny he was. I recognized the tie, and although it was really well preserved, the colours of the fabric faded a bit, the song kept playing and I was just standing there, hypnotized. Turned around and there it was… “Blue Jean” to save me from sinking… I lost my friend in the museum, not knowing he was equally submerged in this overwhelming experience that was obviously too much for two Bowie fans like us. We met at the end when they threw us out, it was 5 pm, the museum was closing. We set on the bench in front, both bursting into tears, not caring if we acted like two complete idiots in front of one of London’s museums in broad daylight.
So on January the 10th 2016 I woke up and received a message from my husband: Bowie died. It was on BBC1 this morning at 6:20. I read it and didn’t feel a thing at that second. The day went on, I was doing ordinary stuff and I thought, OK, I knew for some time now this would happen soon, as if you have ever seen a person who was about to die, you can now, and I knew it… so I thought I was prepared. It was the next day that I could not stand the fact at all, and the more people posted on Facebook, the worse I got. Suddenly Bowie was everywhere and it hurt so much to look at the posts and the pics. I could not force myself to listen to him, as I usually do. It took me 10 days to play his songs again, just last night I could. Of course I am still in tears every single day, and I cannot compare this sadness to any other, as I have recently lost my own father, a great musician and a poet, but it is nothing like that… another kind of pain. As I loved Bowie without him ever knowing I existed; a one way relationship with a person from outer space, an alien, a starman, a god.
Listening to Blackstar at this moment… he must have been a genius and a madman as well.
So this is my story, and it was written so that you can remember yours.

There is still an opportunity for those who have not seen the exhibition to do so!
You can visit it at the Groninger Museum in The Netherlands and it will stay opened until March the 13th 2016.