After Script from The Bridge and What Does It Mean? Basically, The Chameleons started another adventure with a major label. Geffen released Strange Times, but although this is the best record by the post-punk band, the LP was basically a flop (at least for a major). When manager David Fletcher suddenly died, the story of The Chameleons ended. A pity, because this was a band at its peak and God knows what other beautiful things they had in store for us. Well, we got it in a way, because The Sun & The Moon (the project by Mark Burgess and John Lever) is actually the fourth album by The Chameleons. But let’s go back to that third pearl, as it were indeed strange times…

Opener Mad Jack is actually very atypical for what will follow. An almost cheerful up-tempo rock song in which the love of Mark Burgess for David Bowie is obvious, because it is almost his Rebel, Rebel.

The foursome from Manchester throws out the demons. We have no future, we have no past. We’re just drifting ghosts or glass (te first words of Caution). For the first time in the career of The Chameleons, the keyboards are at the fore. It’s a song about pain, a song about what happens when you stick a needle in your arm. It’s the story of the misery that is caused by drugs and it almost lasts 8 minutes. It was not the first time that Burgess sang on this subject, because Second Skin of the debut album also deals with it. 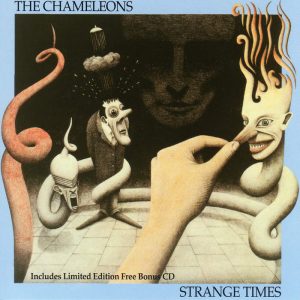 Ready for something light? Forget it! Tears follows, the most beautiful song ever made, but it is also one that literally brings tears to your eyes. This is pure Chameleons, madness, the irresistible urge to stop the button of your body. On the LP you hear the acoustic version, but later, on the bonus disc of the limited CD, the glorious guitar version was included, and yes, it is even better!

Will the ghosts just stop following me?, Mark asks. No, because the next track is Soul In Isolation. Surrounded by fears, too many crowds, too many tears. A cry, a final blow. Are The Chameleons the godfathers of post-punk? Perhaps, they surely are the band who goes to the deepest of your dark soul.

And it continues. Swamp Thing probably has the most beautiful guitar line in a wave song, but there’s also the text. When the demons knocking on your door, you’ll still be staring down at the floor. Of course the single flopped, but the Manchester four wrote one of the most important songs ever.

Is there a break in this melancholic trip? Maybe Time/The End Of Time is. There’s still plenty of melancholy, but you you can smile for a while, even though it is a cynical laugh.

I used to be so sure, I used to be so certain, now it’s gone, Mark whispers on this track that is actually a first glimpse of what we could expect from his next project (The Sun And The Moon).

Strange Times is also a record full of envy and anger. In Answer is a wonderful example as well. It could be a song for some wild dancing on your bed, but in the middle everything explodes. Mark shouts: I do not know what to say. Neither do we.

Childhood is – honestly said – the least song of this gem. But do not worry, I’ll Remember is an instrumental that closes this masterpiece in pure beauty. It’s as if the curtain falls…

As mentioned, there is also a limited CD on which you find a bonus disc that includes the guitar version of Tears, the incredible Paradiso, Inside Out, Ever After, the Bowie cover John I’m Only Dancing and The Beatles classic Tomorrow Never Knows.