Swedish Post-punk A Projection have returned with their new album ‘Section’. Being firmly in the post punk genre, it’s very hard for any band in this world to escape their influences. Which is basically one band that rhymes with Boy Division. But bringing that band up is lazy journalism. It’s like mentioning Metallica in a review of a thrash album. 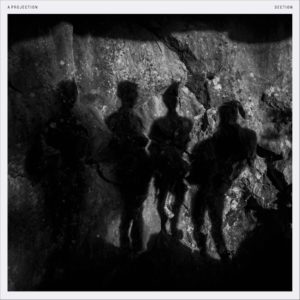 ‘Section’ is a well crafted album. Well written songs, plain and simple. There’s no frills or studio trickery per se. Just a collection of people who know how to play and how to write together. And to be fair, they’ve nailed it.

Set against the backdrop of turmoil within the band, including line up changes and health issues, A Projection have emerged from this turbulent period renewed and have grown into a new stage of their musical journey.
Rather than a melancholy look back at this period, this album is brimming with positivity. The songs are energetic, catchy and powerful. Covering a decent cross section of the post punk, goth rock, indie and even a little shoegaze in places. It’s unmistakably 80’s in it’s production values, but it has managed to side step the current trend of tedious synth wave revival and has created something quite authentic. If it hadn’t been mastered so well it could have easily been mistaken for something that actually came out in the 80’s.

A Projection have managed to grasp the holy grail for any band, which is making an album that sounds great on record and on the live stage. This is where their song writing abilities really shines through. Hats off to you chaps.

‘Section’ is out October 25th on Metropolis.