“…but we sure don’t give a fuck,” Chris Connelly sneers in the chorus of “American Parasite,” the title track off the first full-length album from industrial-punk supergroup The Joy Thieves. Maybe they don’t, but I can tell a lot of sweat went into the making of this brilliant album. Described in the press release as “leaning unabashedly into its punk roots,” I downloaded my promo copy just in time to test it out at the skatepark. I listen to a lot of my music on the go, and when I skate, the energy and volume levels of my album of choice need to pass “the skate test,” meaning they must be audible over the roll, grind, and pop sounds of a skate session and they must inspire me to risk head injuries and broken bones. Yes, there are times where I kick back and just cruise around to the more mellow fare in our scene, but generally I crave high-energy, dynamic music to keep me in the mood and boost that adrenaline rush. After all, it’s “skate and destroy”, not “skate and be overly cautious while watching your hearing”. (That said, please wear a helmet…)

With this in mind, I queued up the album and rolled into the bowl just as Connelly’s furious bark kicked in over raucous guitars, rattling bass, and thrashing drums. I was listening on my mp3 player and let the album flow into a solid unit of noise and grit and raw brutality. “My Life In Power” is classic mosh pit fare with shredding guitars and singalong lyrics: “Gimme the street with the sharpest edge/gimme the life where I’m better off dead/gimme the power to escape the waste/gimme the dregs of the human race.” If you know your punk history, the influences can be heard easily, yet the Thieves put their own spin on it and keep it fresh. “Crown Of Expulsion” has a Buzzcocks vibe to its dynamics, while “Valley Of Pistols” veers almost into hardcore territory. Connelly’s spoken word skills are put to use in “Blood Slogan” to great effect, his chant-like vocals carried by drummer Dan Milligan’s ruthlessly driving shuffle. 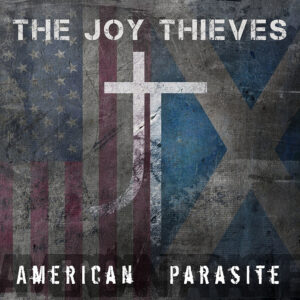 The last track, “The Strange Case Of…” delivers a powerful message about the current state of a society still grappling with the pandemic. “Strange case of civilization shooting itself in the face of creation/strange case of history exploding/you refuse to light the fuse/strange case of burning down/before it had a chance to catch on fire.” Lyrically, I would say this album contains many of the strongest songs yet, running the gamut from a fuck-you to America to an anti-war anthem, to general rage against the way things are. They’re pure poetry yet they’re also memorable…and therefore perfect to spraypaint on the sides of buildings or tattoo on the inside of your lip, perhaps.

To sum up, I don’t know if they give out punk points anymore, but this album certainly earns our favorite Thieves a lifetime amount, and asserts with certainty that punk’s not dead.

(Psst…Get it here on Bandcamp!)