Long known by lovers of 4AD Records’ earlier output and also loved by millions otherwise, Dead Can Dance frontwoman Lisa Gerrard has continued creating a universe of sonic beauty even beyond the scope of the band. Now, with her latest ‘Burn’ album with Jules Maxwell, she’s created something equally, if not more stunning, than the bulk of her soundtrack work over the past few decades. Today we are pleased to present ‘Heleali (The Sea Will Rise)’, with the accompanying video directed by David Daniels. 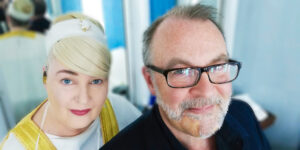 Lisa Gerrard has noted her delight with the way this track has turned out, stating, “the album begins with Heleali, a meditation on the eternal rise and fall of the tides. It is a call to let go of the past and reflect on the elusive shadows of evaporation.”

“This always felt like it had to be the opening of the album for me. It cycles around a simple elegant chord progression. Ebbing. Flowing. Swelling. Out into deep water,” added Jules Maxwell.

Produced by James Chapman (MAPS), this long-play is out now via Atlantic Curve, a London-based label that is part of the Schubert Music Europe. With Chapman joining as producer, ideas generated freely and over time, a distinct sound for their work began to emerge. Their focus was to create something that was both euphoric and compelling; more inventive than what they had worked on separately in the past. From gentle beginnings, each track builds and intensifies, creating a hypnotic experience to listen to from start to finish.

“This track works really beautifully as an album opener. I visualised vast oceans and endless horizons. The song grows and grows, like the waves of the ocean, from the grand opening to the uplifting end section,” says James Chapman. 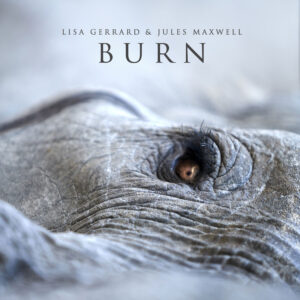 ‘Burn’ began its journey more than seven years ago, when Lisa met Irish theatre composer Jules Maxwell before working together for the first time. Things really took root when Gerrard and Maxwell began writing songs for their earlier collaboration for ‘The Mystery Of The Bulgarian Voices (Le Mystère des Voix Bulgares)’. After being introduced to Chapman, they asked him to produce this album, which is a stunning departure for all three of them.

Jules Maxwell explains: “‘Burn’ was never planned to be an album. Like many joyous things in life, it grew slowly and unexpectedly. One song at a time. The seeds had been planted by Lisa and I whilst we were working on songs for another album, but didn’t begin to flower until months, years later… What we have created still makes the hairs on the back of my neck stand up from time to time.”

The ‘Burn’ album, released on May 7, is out now. It has already sold out as a very limited edition Non-Fungible Token (NFT), numbering among the first commercial music works available as an NFT via the eco-friendly platform Hic Et Nunc at https://hic.link/burn. Apart from the usual digital platforms, this long-player can be ordered on vinyl, CD and digitally at https://orcd.co/lisajulesburn

photo of Lisa Gerrard and Jules Maxwell by Robbie Perry