I really enjoy hearing something different, therefore this album was very refreshing; these guys know being different is going to get you noticed. They have adapted sounds and made things sound odd to achieve this in a really good way. This twenty-eight minute, compact album has a ‘human’ theme throughout and ‘Homo Sapiens’, that first track I already mentioned, has a ‘Shakespears Sister’ tinge. Maybe it’s the female vocalists, but I don’t get the impression they are trying to impersonate. The whole track is stomping, dark and driving. It’s a great listen with a good set of headphones on. The second track, with the introduction of male vocals adds extra dimension. I feel this track seems reminiscent of 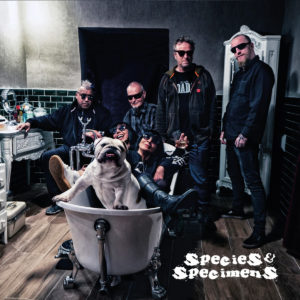 something by ‘Army of Lovers’. Something certainly from their first hit album. Again, I think they have just stumbled into sounding this way; I hope ALK-A-LINE see my connections to these other two artists up to this point as compliments, but I honestly don’t get the impression they are trying to copy. The album continues. We have layered pop style tracks with vocals aimed directly at the listener. Are you listening? We have something to say! It’s clever and fun. There is a nice mixture of tempo speed to distinguish each track and this adds to keeping the listener focused. One track runs into the other and you honestly don’t know what is coming, perplexed by invention. This is a very organic album with an underlying sense of fun and mischief. It has a very live sound too. You can almost see these guys on stage pounding out their hearts and souls into your mind. The album can also be interpreted differently depending on your method of listening. Through speakers in your lounge, walking along the street with headphones or driving in your car. The mixture of tracks and perfect lengths to them are completely satisfying. But when you discover a hidden gem towards the end of the album that grabs you unexpected that is an extremely nice surprise. I absolutely love ‘Black Queen’. It seems to have everything to make a perfect track. Dark, menacing and haunting. Great rhythm, great vocals and lyrics with a nice intensity. However, the album doesn’t stop there. It continues and you really don’t know if there is going to be something else that spikes your musical taste buds! The 8th track is very gothic, again using interesting sound techniques. This group do not follow rules. They do what they want to very good affect. But if you call a track ‘Human’ and decide to finish an album with it, it has to live up to expectations. It does. It wraps up a perfect mini-album. It’s a very cleverly put-together work of art. A wonderful, refreshing different. An album I enjoyed writing a review about. If you want something different to listen to, this is the perfect album. It’s fun-sized. It’ll keep your senses alive and you will have time to play it all over again in the same time span as a traditional album! ALK-A-LINE started in 2006, 13 years and two albums later ‘Species & Specimens’ gets released in September 2019.