Some talented “six-string for hire” musicians stand shoulder to shoulder with their trusty bandmates, taking the odd job to pay the bills. Some strive to leap onto the shoulders of giants, often ending up standing on those akin to a munchkin. And other guitarists, with serendipitous timing, can become a dynamic creative influence on the already established outfit, frequently refreshing the band/artist’s repertoire, breathing new energy into what was at risk of becoming a stale, staid and lazy re-tread. One consequence is that the contractual demands often impact detrimentally on the artist’s own potential creative output. Not Black Sugar Transmission’s Andee Blacksugar. Whilst holding down the chugs for KMFDM and strumming the highwire for Peter Murphy, he’s endeavoured to persist in his own prolific innovation. “Wandering Into The Bullseye” is the latest result. And it’s really rather very good. In stark contrast to the Motorhead “Overkill” tribute album we got in 2018, the album kicks off with a soothing, electronically processed barbershop quartet apo-calypso abruptly interrupted by a chiming buzz of modern-day appliances. “Like Glass” is an amuse bouche possibly hinting at what we might expect to sample in the following forty-five minutes –and it’s 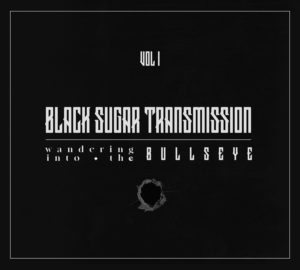 light years from any industro scampster or goth campster affiliation. But we’re wrongfooted immediately. We get “You are a Crime” all pounding, pretty hate beats and scintillatingly incongruous Banshees Bad Jujupluck. But the vocals are quite enchanting, recalling the short-lived Romo movement –sounding like a boy from North London pretending to be an East Coast American. It’s great. Next, there’s ”Rescue Sirens” an accomplished Bowiemechanical animal stomp with hints of Reznor doing his best Prince impression. But his name is Andee. And this is funkee. The spirit of Prince is never far away, as witnessed in the opening riff to “Lovely People” perhaps, subverting those Beautiful Ones. “Our Time Won’t Come” follows, with its retro synthwave vibe and scary 80s horror quiver, leading into the album’s first single “Don’t Blame the Horse”. It’s catchy and very moreish, as the intent might suggest. It would be quite at home on Dandy Warhols’ “Welcome to the Monkeyhouse”. Track seven is ”Padlock’s on the Cage” and it’s quite something. Hauntingly claustrophobic, Andee sounds like he’s right next to you sometimes, whispering a voice of guilty conscience accompanied by a kick/snare groove reminiscent of Sulpher’s “Problem”. Or, dare I say it, NIN’s, “Closer” if anyone’s heard of that… Harsh synths belt us into “Something Better” and again, can’t help comparing it to Nine Inch Nails. Don’t get me wrong, I’m excited to find a song that sounds like it’s straddling Pretty Hate Machine and The Downward Spiral. With Green from Scritti Politti singing. And a guitar solo from Prince. You’ll like it. “Deplorable” struts into view and it’s easily the catchiest. All punchy kicks, vocal earworms, Theremin kitsch and glamour trash swagger. It’s adorable. Next, we’re into “Kids in America” by Kim Wilde. Except we’re not. Once we manoeuvre past the pulse bass, we’re propelled onto a canvas splashed with colours from Suicide, Beach Boys, OMD and Sparks. It works. Something that doesn’t work, or at least doesn’t immediately, is the next song “Rotting in My Castle”. It’s almost like we’ve overshot the funk and ended up in 80s RnB. But I guess that’s what it was supposed to be like. After a few more listens, it starts to charm, though. Soon enough, we’re back pounding the glam rock glory with “Night of 1000 Crimes” battering heads with a Glitter Band jackhammer beat and Andee’s searing, soaring vocal cords. The chorus is so immediate, I could imagine raucously singing it at a football match. And I don’t like football. It’s joyful. The penultimate number is “Right Underneath Yr Nose” (yes that’s how it was written). It reminds me of that interesting time when Britpop was snoring itself to death and we were getting insane, absurd but stylish backlash acts like Plastic Fantastic, Nancy Boy and Minty. Wouldn’t feel out of place, despite not fitting in at all. As it should be. At 4:33 minutes, “Across This Night” is by far the longest ditty here. Sounding like grunge if it’d been invented by Duran Duran, it’s wild. References to Dorian Gray take us into the final seconds, accompanied by a dark side of the mood guitar solo, to finale on a Tron-like flutter. Then a chime. Where we came in. Was going to say “And it’s all over” but it’s not. This is only the first instalment. Wandering into the Bullseye is the first of three Black Sugar Transmission albums set for release this year. And he’s certainly set himself a challenge, if he wants to better this one. It’s astonishingly good. Andee’s evidently influenced by his peers. Never a copyist, he’s mixing the glam rock / industrial / psychedelic funk into something uniquely his own. Straight into the bullseye.