Bodykomplex was formed in 2012 when two guys from northern Finland decided to make a few old school style EBM songs just for fun. As Kris and Olaf state, “It’s all about the glory of manliness, having fun and not taking life too seriously.” After getting positive feedback from their audience they decided to work on their debut album “Karma” which has been released on EK Product Label this year.

They tell stories of everyday life in a somewhat humorous way, but unfortunately many of us are not able to understand them as they chose to sing in Finnish, but even that fact adds more diversity to the otherwise very compact sound of “Karma”, making it more interesting. 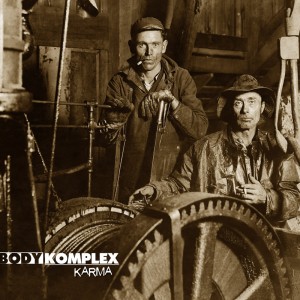 What you immediately notice, as the first songs begin to play, is the recognizable sound of old school electro beat and raw EBM energy. But even though you have stepped a bit back in time with that old school style, their songs are characterized by melodic synths which brings a bit of freshness to the term “old school” as they combine old school raw aggressive beats and vocals together with the sound of synth pop.

The songs are short and direct, going straight to the point and leaving you with no time to get bored, but making you want to move your body on the dance floor, which was obviously deliberately planned and intended and very welcome on an album such as this. These guys really made their point.

The pace is generally maintained throughout the album, giving you no time to rest! In general I see this album as a meeting point of old school EBM music and synth pop, combining elements from both genres. My favourite tracks are “Neuvoa Antavat”, “Viinapiru” and “Työttömän Miehen Blues” with more prominent synth melodies, but if you are up for some more raw EBM power, check out the rest!