The X-Men and Twin Peaks actor Caleb Landry Jones has just released a truly fascinating debut album The Mother Stone. The opening track ‘Flag Day / The Mother stone’ introduces the listener to the experimentation and rebelliousness which underpins the album. The equally artistic music video for this track welcomes us with a fusion of the creepy and the creative, visually reinforcing the album’s cover and encouraging the listener to soak in this mixture of expression. The cabaret fusion of brass and strings takes us on a journey which will span multiple styles and emotions. 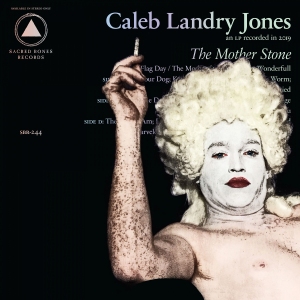 Discordant instrumentals reminiscent of Aladdin Sane reappear throughout the album, leaving the listener with a sense of anticipation and on the edge. There are times during the album where Jones projects clear influences of Syd Barrett, sharing unbalancing vocal shifts and schizophrenic moments. In songs such as ‘You’re So Wonderful’ and ‘Licking The Days’ slow minor keys convey a sense of creepiness, only to be disrupted by unexpected major chords as Jones delivers a discomforting form of reassurance through his vocals.

There are also songs which explore the sorrow and emotional deterioration of psychedelia. ‘Katya’ is a song both sorrowful and beautifully melancholic in essence. The vocal shifts continually from deep and unsettling to soothing and gentle, screaming out a sense of duality. Further contributing to the album’s sense of sorrow is the ballad ‘I Want To Love You’, a song dominated by emotion, from the brass construction to the powerful crescendos which accentuate the raw representation. The composition of this masterpiece can only be described as if Aladdin Sane ended a relationship with Sgt. Pepper, a passion sung with all seriousness.

While ‘I Dig Your Dog’ and ‘For The Longest Time’ juggle with melodies and ethereal vocals, ‘The Great I Am’ and ‘No Where’s Where Nothing’s Died (A Marvellous Pain)’ work as a sentimental filler, lifting us back to a sense of anticipation. ‘All I Am In You / The Big Worm’ stands out for its stripped garage rock sound while allowing big structured choruses to shine. ‘Thanks For Staying’ fuses Frank Zappa’s signature psychedelic sound with the Barrett-era Floyd influence, reinforced with soft piano chords and strings. This track sums up the journey of the album with a nostalgic reminiscence through multiple tempo changes and time signatures.

Jones’ introduction to Sacred Bones Records resounds with a smack of creativity which has not only been lacking, but disappearing among modern artists; The Mother Stone goes beyond boundaries and deserves a cult following!