I first heard Chris Connelly’s solo work on the Wax Trax! Black Box with the brilliantly haunting “Stowaway” and later on another Wax Trax! compilation with the unexpectedly funky “Candyman Collapse.” I was already a Revolting Cocks fan (and yes, Chris has always been my favorite Cock!), so my teenage mind was blown when I learned he had a hell of a voice even beyond that. Later on in my life, I picked up Shipwreck in its entirety and was captivated by how different it was from anything else I was listening to at that time. Chris Connelly’s solo work quickly became an inspiring fixture in my life on the same level as all my favorite industrial artists. 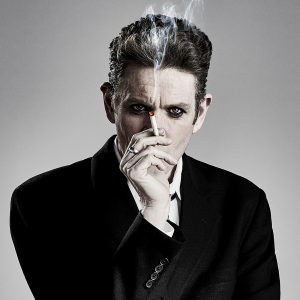 From its opening swells, Bloodhounds has a gritty, raw feel to it that is at times tongue-in-cheek and gives a nod to both 60’s psychedelia and 70’s glam rock. At times it’s reminiscent of Shipwreck, which is part of why I love it so much. The swirling organs and harmonica solo in the title track set the tone for the rest of the album, which sprawls out into sixteen songs, bringing us through many moods and influences. It gets somber with the minimal strums and stark vocals of “Desolation Blues” and “Brush Stroke Blues,” yet empowering with the infectiously upbeat chorus of “Jump, Goddess, Jump.”

“I Figured It Would Be My Undoing” features one of Connelly’s best vocal performances, from gritty glam rock falsetto to rocker croon. The album is also full of literary references and poetic elements, such as his, well, mesmerizing, nod to French New Wave film star Anna Karina in “Anna Karina’s Guide To Being Mesmerized” as well as his spoken word passages in “I Dream in Argentina” and “F-Birds.”

While his previous work on The Tide Stripped Bare had a sort of airy, ethereal quality, Bloodhounds grounds us firmly to earth and explores darker territory. As a listener, it takes you on a journey through self-reflection and empowerment. Bloodhounds reaches the listener on a very personal and emotional level and the stories Chris tells with this exceptional album are here to stay, like our own memories.

Enjoy the video for “Ascension”!