It’s not easy to review such an exceptional record; Connelly’s art is complex and requires deeper understanding and reflection. This album is a window into Connelly’s very intimate self; even if you don’t speak the language, you will notice that he’s never sounded more personal.

The opening song, “Graveyard Sex”, could be the most goth song he’s ever written and the album one of his darkest creations; if you’re aware of the recent events in his life, you might guess the reason behind this. Even though Connelly started writing for this record hoping his very ill friend Bill Rieflin would be able to contribute, Bill’s long fight with the illness made him unable to do so. Connelly continued working on the album with Bill in his thoughts, which evidently influenced the songwriting. The album is rich with musical references they both loved, from songs to cover artwork, which is a gallows humour to Roxy Music’s Country Life. Although the idea for the album title was initially just a joke in Connelly’s head, soon it started to represent the meeting of death and life. 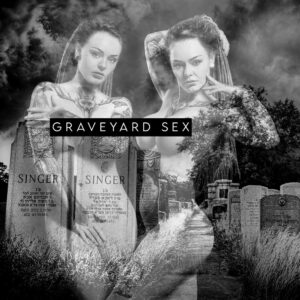 After the monumental and majestic goth opener “Graveyard Sex”, “Infinite Last Wish” marks a shift towards a more melancholic and more personal ambient; Connelly’s soothing voice transforms to almost weeping exclamations “To die in lost eclipse!” The song which follows is among the most beautiful songs he’s written; what “Anna Karina” was on Bloodhounds, “Silk Balune” is on Graveyard Sex. It’s a true sonic seduction; Chris lures you in and captivates you with a chant-like chorus. “Lindsay Cooper” is a close reference to Bill’s final fight, based on a story about the musician they both admired and who, despite her passion for life, eventually succumbed to her illness. This dissonant and quiet number puts a spotlight on Connelly’s vocal performance that’s stripped down to a raw human emotion; bare and exposed, Chris conveys the story about death and life.

“Hypnotic Stand-by” is the first single taken from the album and it’s the only pop sounding track; it’s catchier, lighter and brighter than the rest of the material. Restrained vocals make way for the beautiful and comforting soundscape, while maintaining a perfect balance. A hidden reference to Robert Wyatt reveals the presence of Bill. While “Hypnotic Stand-by” comes closest to the pop format, “The Heart Has To Ache Before It Learns To Beat” is experimental, ambient and minimalistic; the sounds are merely accompanying and supplementing the vocals and lyrical content. Although minimalistic, it’s powerful and, even if you can’t sing to it, you’ll remember the message. Dreamy acoustic soundscape and emotional vocal performance make “Mesmerido” mesmerising; Connelly creates intriguing, almost mystical and hauntingly beautiful sound settings. “For The Love Of The Tension” is another simply stunning moment on this album; it’s ethereal and atmospheric, soothing and melancholic at the same time. While it would work well as an instrumental, the unexpected short vocal appearance takes it up a notch.

Knowing what the album was about, I thought I was prepared for anything, but I wasn’t prepared for a breath-taking, gut-wrenching cover of Nico’s “You Forget To Answer”; the image of Bill emerges again in the weeping voice and intense, emotion-charged atmosphere of the cover.

The album closes with the minimalistic electronic piece “Looking For A Coda”; similarly to “The Heart Has To Ache Before It Learns To Beat”, the song is an example of Connelly’s experimental music expression, which we could fully enjoy on Sleeping Partner.

Although there are references to his personal taste in music, Chris Connelly is a truly unique and extraordinary artist. Graveyard Sex is one of his most impressive albums, an awe-inspiring, soul-stirring record with a saddening back story; the album is a homage to Bill Rieflin, but at the same time it is “about facing death with life, inviting death into your life and trying hard to accommodate this unlikely guest.”