We had the pleasure recently of asking Chris Connelly pretty much anything, from the inspiration behind his new album Bloodhounds, to his involvement with other projects, including an upcoming compilation, a couple of appearances with Al Jourgensen, and his contribution to the upcoming Front Line Assembly album. It was hard to narrow down the questions, as he’s simply done so much and is such an influence both in the industrial music scene, particularly the Wax Trax! records chapter with RevCo, Ministry, and Cocksure (among other projects), and of his own accord as a solo artist. In this exclusive interview, he talks music, art, literature, and David Bowie.

1. Hi Chris, so nice to have you here. You have been a part of the industrial music scene for over 30 years and many of us associate you with Ministry, Pigface, Revolting Cocks, Finitribe, etc. However, your solo work differs from the aforementioned genre. What are your thoughts on your solo albums? Can you describe your creative process and approach to making music? 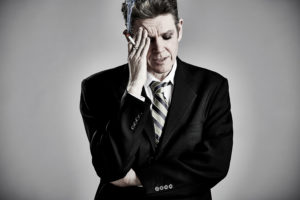 Chris: Hello! Nice to be here! I started making solo albums because I kind of wanted to do everything, I just wanted to explore and be able to create in any way I thought fun or adventurous. It was a few records in that I finally decided I was getting fairly good at expressing myself, working with melody, manipulating it to reflect the meaning (or non meaning) of the song. I found it was a whole world… Most of my early compositional experiments were with co writers, like my first band FINI TRIBE. We were teenagers and we learned so much about space in music and dynamic, and how to build songs out of improvisation, all amazingly important skills I will always use, but I think you might agree, something like the new album BLOODHOUNDS has a shape that could only be mine.

2. I can hear that you’re influenced by David Bowie…what is your favorite album and song of his?

Chris: STATION TO STATION….song and album. I bought that album in 1976 when it first came out and the album STILL intrigues me as much as it did then.

3. You have what I perceive as a few different personas for each project that you’ve been involved in…Cocksure, RevCo, your solo work, Bells Into Machines…do you ever feel like they overlap? Do you try to keep them separate?

Chris: I definitely do, it’s definitely part of the fun for me; when I was first in REVOLTING COCKS I did not really have a character, I was young and stupid, maybe THAT was my character, but now all that stuff is a role, and that makes it a lot more fun, deciding what this guy will wear, who he’ll be a dick to…you know! I see them as characters on really bad TV shows or in questionable novels. That said, a lot of the COCKSURE characters are influenced by characters from MARTIN AMIS books, he is one of my favorite authors and always comes up with the most despicable and stupid characters.

4. It’s been interesting to see what all the alumni of Wax Trax! have been up to as the years go by. Who do you keep in touch with and what did you think of the film?

Chris: I love the film, and it has actually brought us all very close together again which is nice…I think everyone realizes “Wow, that WAS an important part of all of our lives!”.

5. How do you feel your Wax Trax! years shaped your development as an artist?

Chris: The label let me and many others do what we wanted, they indulged our musical whims and did so with a ravenous appetite for the creative, bizarre & eccentric. Who the fuck DOES that??? It was an amazing experience with some incredible people. 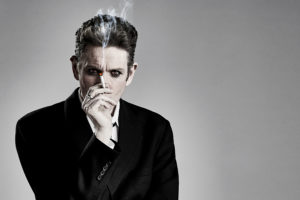 6. Bloodhounds is such a diverse album. “F-Birds” comes close to neofolk and “Richter Grey Stairs” evokes memories of the 4AD and Cocteau Twins. What was the inspiration behind the album?

Chris: I never start a record with a solid idea, it always forms itself over time. Somehow BLOODHOUNDS started to make sense, but not until the end when I wrote the song BLOODHOUNDS and said “BLOODHOUNDS!, that’s the album title, okay, I am finished” and I had 80 minutes of music, but it all just made sense of itself. The order of the 16 songs was easy. I was not going to edit down to 40 minutes, every piece was crucial in the whole picture, as far as a statement. I think it is the most honest representation of myself and the way my creative mind works. As far as inspiration goes, I think I have found a great space where perhaps life intersects with expressionism, surrealism and, most of all, the bits in art that I personally feel are the most important, and then I simply try to recreate the colour and the space or dimensions of visual art, not really specific pieces. This is more about fascination with the mind creating this stuff at the absolute point of creativity. I think the songs sound as three dimensional as I can make them, I have created my own little universe.

7. You said you’re a teacher in one of the interviews (if I’m not mistaken) and that you wrote “Anna Karina” about one of your students. What do you enjoy most about teaching? Has your teaching experience inspired any other songs on Bloodhounds?

Chris: I work with a lot of teens and a few adults teaching voice, it’s an incredible experience and I learn so much. The student who inspired ANNA KARINA, Scout, is 16 and obsessed with the new wave of french films. It’s not just the facts she has memorized, but there is actually a lot being brought to the lesson, maybe methods of working in film that can be translated into the musical process. As far as influencing BLOODHOUNDS, everything influenced it. The song BLOODHOUNDS was the direct result of a dreadful panic attack I had. I wrote the song and it put the panic attack in a perspective where I could understand and walk away from it….that’s life, that’s what writing is for….sometimes. 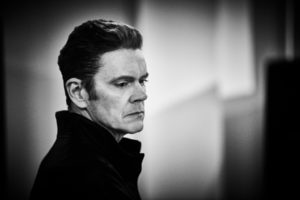 8. When we talked at Cold Waves, you mentioned being interested in spoken word. I noticed on Bloodhounds, “F-Birds” incorporates a spoken word section. Is this something you want to do more of?

Chris: Whatever is required really. I did a whole album of poetry in 2016 called NEW TOWN NOCTURNES. Some things I write just sound better spoken.

9. Similarly, who are some of your favorite poets and authors?

10. How much are you inspired by visual art?

Chris: I would say a lot, it’s perhaps the biggest inspiration. If it’s something I really love, it unlocks something in me and inspires me in quite a visceral way. 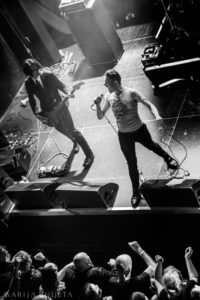 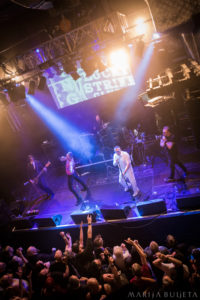 11. You toured with Revolting Cocks in 2017. You played 3 major industrial/gothic festivals: Cold Waves in the US, WGT in Germany and Infest in the UK. How did you like playing the festivals in different countries? How do you feel about festival shows compared to solo shows?

Chris: It was a lot of fun, I am grateful that I get to do this sort of thing, I don’t really have an opinion.

12. What’s exciting about today’s industrial scene? Which performances at Cold Waves jumped out at you this year?

Chris: It was OMNIFLUX. It was just stunning, more of a sculpture, but with this beautiful music.

13. Could you tell us more about the track you did with Marc Heal for Jim’s upcoming compilation? Who else would you want to collaborate with in the future?

Chris: I wanted to be a part of it; the whole subject matter of the album is a frightening one, and it horrifies me that in 2018 LBGT basic human rights are even in question.

14. You collaborated with Front Line Assembly on their upcoming album Wake Up The Coma. How did that come about?

Chris: They asked me! I became friends with them on the Cocks tour, and it was really nice to be asked, and the track they gave me was amazing.

15. On November 29th you made a special guest appearance on stage with Ministry. Can you tell us about the experience?

Chris: Yes, it was the 2nd time I did that this year. I was so thrilled, it was amazing and nostalgic, and fresh and inspiring. 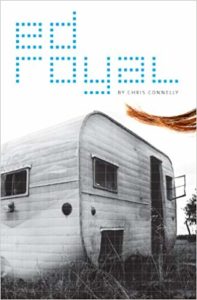 16. Are there other aspects of art besides music you like to explore? Can you tell us more about yourself as a writer?

Chris: I have written fiction, I wrote a book called ED ROYAL about 10 years ago. It was a kind of a thriller, a novel with a twist and a crime, and I am proud of it, but I have not been able to do another one, which is fine, if it happens it happens, but I honestly do not remember doing it, or how I did it. I cannot seem to access that part of my mind, so I let it go and went back to 3 minute pop songs!!! Writing a book meant that I had to write a book. It was a lot longer than a song, and I had to figure it out, come up with a plot, see where the plot went, think about timelines; all this stuff you never need to think about in song if you don’t want to. Right now I have been writing more long form poems; there is a little repetition but no traditional verses or choruses, which I think is an extension of the way I wrote for BLOODHOUNDS. Of course some songs have a traditional structure, but many I wilfully stopped myself, have ONE chorus, or have NO chorus, or just 3 changes stuck together, and those were all decisions I made on the fly when I was writing. It was like trying to navigate water, gut instinct and a sense of adventure.

17. What can we expect next from Chris Connelly?