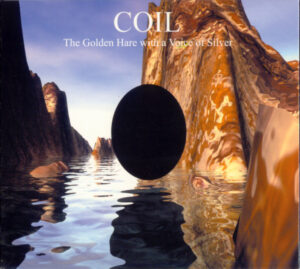 Coil: The Golden Hair With A Voice Of Silver- A Guide For Beginners

The aptly named double-disc reissue of The Golden Hare With A Voice Of Silver- A Guide For Beginners does indeed serve as an excellent introduction to dark ambient industrial pioneers Coil, especially given that so many of their releases are hard to track down now. It was previously released in 2002 only in Russia, so it’s great to see it now as a part of the Metropolis catalog. Despite pulling from many different albums over the years from the notorious Horse Rotorvator to Scatology and everything in between, the track list flows nicely as one continuous listen. The first disc takes us from the strangely calming spoken word of “The Lost Rivers Of London” to the sickly, spooky drones of “At The Heart Of It All” and the twisted soft-jazz of “The Dreamer Is Still Asleep”. The next starts with the dissonant industrial clank of “Panic”, includes a dizzying descent down “The Anal Staircase” and the delightfully creepy “Blue Rats”, ending with “The First Five Minutes After Violent Death,” from the coveted limited release Gold Is The Metal.

While revered and stereotyped in equal measures as counterculture industrial weirdos who relentlessly pushed boundaries from “classic” industrial to neo-folk to fucked up Pagan symphonic ambience, it’s easy to forget that beneath the constant bucking of convention there was a lot of talent. Peter “Sleazy” Christopherson’s musicianship and arrangements were brilliantly layered and often beautiful if not very strange, and that John Balance’s vocals were wonderfully raw, while his lyrics transcended us to something that felt like another world. The result is a collection of music that feels both like the capturing of a very specific era and sound in the industrial genre, as well as something which has managed to transcend time and land in a category all its own. Many die-hard Coil fans will argue that this collection doesn’t even come close to scratching the gritty surface of their discography, but it’s certainly a solid starting point and is probably as close to a “greatest hits” as you’ll ever see. It’s been 10 years since we lost Sleazy and 15 since the tragic death of John Balance, and this feels like a fitting and long overdue tribute to their genius.

Buy the album on the Coldspring Bandcamp page