Kolossus is the aptly titled and long-awaited new EP from UK electro-industrial aggressors Cubanate, who released Brutalism (a compilation featuring songs from their first three albums) on Armalyte in 2017. Brutalism coincided with the band reuniting to play the Cold Waves Festival and then a tour with RevCo and Front Line Assembly. Prior to that, their last full-length release was 1998’s Interference. 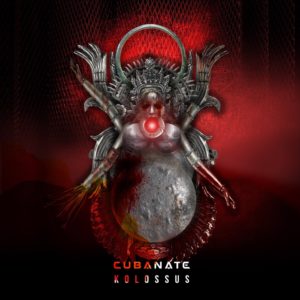 The title track starts off with abrasive synths driven by layers of Phil Barry’s furious guitar, with Marc Heal’s tortured vocals adding even more brutality. Heavy and gritty, it sounds like the backdrop to a cyber-terrorist nightmare. “Split Second” leans a little closer to Heal’s C-Tec days with an EBM-inspired dance floor beat and infectious chorus. “Vortex” is another instant industrial club night hit… the four on the floor beat is like a punch to the solar plexus with relentless arpeggiated synths urging you to stomp harder. “Pattern Recognition” effortlessly combines chugging metal guitar riffs with distorted synths and a massive beat. As an added bonus, there are two blistering remixes of “Kolossus” by the likes of EBM/techno mastermind Rhys Fulber of Front Line Assembly and new-to-the-fold industrial rockers Drownd (also of Armalyte Records). Fulber’s glitched-out, rhythm-driven remix brings us to a nightmare rave and Drownd breaks the song down to its bare bones and then builds it up again into a teeth-clenching, hard-hitting grind. All in all, Cubanate’s latest lives up to its name and will knock your fucking head off.