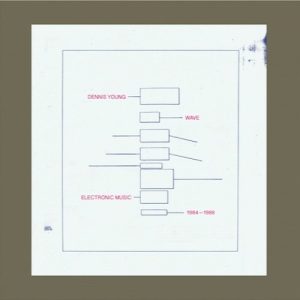 In the early 80s, Liquid Liquid was one of the most important bands of the New York no wave scene (a reaction to the commercial new wave). The big success for the band came only afterwards. In the mid 80s Grandmaster Flash used one of their tracks (Cavern) as one of the most important samples of his super hit White Lines (Do Not Do It) and later Liquid Liquid was picked up by LCD Soundsystem, which resulted in a short come back.

One of the founders of this cult band is Dennis Young. When his band disbanded, the former percussionist composed a whole series of tapes with electronic music, that were clearly inspired by the masters of the 70s.

WAVE/Electronic Music 1984-1988 is a collection of these obscure recordings. You find eleven tracks on this CD, most of them completely instrumental. It is clear to whom Dennis Young listened. Often the songs are repetitive and even minimal, but it all remains accessible music, even for music fans who are not that keen on electronic Krautrock.

Some tracks like Spirit Of The Ages could have been on Spiral by Vangelis. Because of the cosmic character of many tracks, Tangerine Dream is perhaps the main reference.