There’s a Little Englander myth about not being able to find a poolside sun-lounger on holiday because the Germans have bagged them all previously, by placing their towels on top. You may have heard it. It’s not a conspiracy though. No.

Things are a little delicate in Europe just now.  And Die Krupps, a band going since 1980, is very much aware of this, indeed, always have been, and never so much as now with the new album, Vision 2020 Vision.

The titular track is the opener, nailing its colours to the du hast, reminding their fatherland current contemporaries who is the daddy and who always was. Throwing hard guitar shapes and oppressive synths, you sense the silhouette of how the album’s going to be heard and the sonic outline of the direction. This is further compounded by track two, Welcome to the Blackout, which might reflect a number of political situations from Palestine to Mexico or perhaps, a nod to Europe’s authoritarian past.

A siren blast introduces us to Trigger Warning, a heavy metal synth diatribe aimed securely at the wilfully and politically ignorant. “Shut your eyes and close your ears”, we’re advised, because, “they” think we can’t handle the truth. Funnily, there’s also a nod to Yello, (Swiss New Beat granddaddies) here, perhaps, adding a little colour to the metaphor.

Wolfen (Her Pack) is up next and, well, really not sure about this one. It’s the most metal of the lot and whilst examining the similes, you know, about pack mentalities and instinctive urges, coupled with the howling moon samples, I’m not sure if Jurgen’s not just singing about, well, being a wolf. Which is fine.  Might’ve been that time of the month. 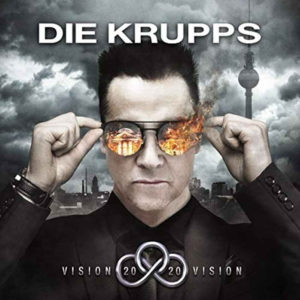 We’re back on track with Extinction Time. And he’s going full metal Combichrist. Only with a social and environmental conscience, rather than bottle-wielding misogyny. It’s bordering on aggro tech, and only tempered by the occasional subtle Billy Duffy-esque guitar refrain. It’s been a bit full-on, hasn’t it? Well, now it’s time to have a bit of a palette cleanser. And wouldn’t you know it, we’re treated to a Peter Gabriel era Genesis cover.  Yeah, really. Carpet Crawlers seems even more prescient now, with its “We’ve got to get in to get out” suggesting a reflection on the dichotomy of  European status, maybe Greece or the UK. (Or it might be just because Peter Gabriel said he liked Die Krupps once). It’s gentle and whimsical but nicely odd at the same time.

Fires, whilst having a brutalist guitar and strings build-up, has the most consummate and sublime chorus here, marching to the grooves of Nitzer Ebb, it also brings into mind the Wagnerian exalts of Carpenter Brut or even The Sisters of Mercy.

Coming up is Obacht, and the only song sung completely in German. It means, “Caution” or “Take care”, interestingly. And it’s a little more understated than most of what we’ve had so far, focusing more on the epic synths than the guitars, which are effectively subdued. Almost makes you want all Die Krupps’ chirps to be sung in the Mother tongue.

Track seven is a waltz-time ditty called DestiNation Doomsday. It’s a little bit overstated and more like something you’d expect from Rob Zombie or Eisbrecher but not something that might dissuade one from the dancefloor.  Not unlike the next one…

The opening of Allies is a blunt reminder of Germaniac, with hard synth stabs, aggressively progressing forward with chunky guitars, sometimes even sounding Black Sabbath, with Nine Inch Nails swabs, lyrics reminding us that we must consistently question and analyse. Or we’re fucked.

Fuck You, is next.

And after the consolidation of the title, we’re treated to a lyrical wink to Propaganda’s Dr. Mabuse, except in this case the master of disguise is not only without shadow, he is also without conscience and that is how he builds, “his world of crime.” It’s rather relentless, sampling the current American president, whilst possibly criticising his reputation. Possibly.  *It’s really not a song about Trump.

The album closes with Active Shooter Situation – a slow EBM groove lament to forgotten ex-servicemen – and Human, ringing bells of earlier works and  successfully, if not shamelessly riffing off  phrases from The Downward Spiral.

And it ends. And it is good.

With hindsight, some may say Die Krupps sound, perhaps, a little derivative  on this album. There’s few comparisons made here to other bands too. Sure there’s hints of Rammstein, Oomph, Combichrist, Eisbrecher, Nitzer Ebb, even Rob Zombie in Vision 2020 Vision but these are all bands who, arguably, wouldn’t exist without Die Krupps.

There’s a reason why Die Krupps should be allowed to do that.

Because Die Krupps, just like the towels, were here first.