Obviously Drab Majesty have a strong musical identity. Yes we all know it has a massive 80’s vibe, but it is miles apart from the assorted retro revival acts doing the rounds now, who simply use an old synth to conjure up images of a bygone era. 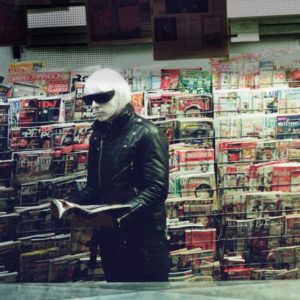 Drab Majesty are simply really fucking good song writers. It certainly doesn’t hurt that Joshua Eustis was at the helm on production duties for this album either. But since the early days Deb (and now Mona too) has had a firm grasp of the craft and how to create moving and lush soundscapes revolving around solid songs that, despite their eccentricities, lay firmly in the pop genre.

Opener ‘A Dialogue’ is an incredibly simple and stirring start to the album. A repeating mantra, layered and layered, with ambient synths and drone building to a glorious crescendo. From there the album generally picks up pace and creates a world and aesthetic in which the songs inhabit with ease and transport the listener to an immersive place.

Stand out track is single ‘Oxytocin’. It’s just so easy to listen to this over and over again, and the pay off at the end is one of the most superb I have ever heard.

‘Modern Mirror’ is a superb piece of work. Maybe not quite their magnum opus just yet, but there’s still time. In a music industry that is constantly spewing forth fresh mediocrity, Drab Majesty are doing what they do best, creating art not entertainment.