I first heard Eirene singing with Oogan at a gig at the Hope & Anchor earlier this year. I heard a demo, stream or sound bite of ‘Moonshine’ and instantly wanted to purchase. It is the first track of four-track EP titled ‘Jhana’. Eirene’s voice is unmistakably crystal. It wafts, sails, floats and whispers and ‘Moonshine’ is a fine example. I adore a singer who can use their voice like an instrument. No wonder Darren had Eirene singing 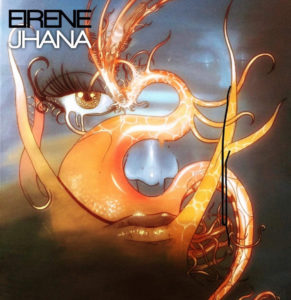 with him! ‘Moonshine’ is haunting; the drum roll, the tempo, the theme all working exquisitely together and Eirene’s voice threading itself through it all. It’s like a modern take of Enya with a beat. ‘Light’ is the next track up. The soft drum works well and again Eirene steps in with great lyrics and flaunts her voice. She manipulates the words through song in a way I have never heard before. Her voice is reminiscent of Donna Summer. This is such a great foot-tapping tune and the song can be interpreted in numerous ways. I’m yet again finding myself listening to music that I would not be able to categorize; that means it should appeal to many. I find myself asking for an album, an EP is too short! ‘Crazy’ is yet again sung with that silky, smooth voice with another soft backing instrumentation. All these songs are produced at such a high quality and drift deep into your consciousness. They are songs you can get used to quickly and put you into a good place. The fourth track ‘Swim’ pricks up your ears, because Eirene has obviously got a great musical range. I’m sure she has no reason to impersonate anyone, but here in this tune, her voice is comparable to Kate Bush. It oddly does sound like a track composed for the end. Not the end of the world, but the end of a night, the end of an album, the close of a party. But you somehow don’t want it to end; in this particular track there are elements of the 1960-1970’s flower power, it’s poetic justice. It reflects an era that tried to introduce the world to perfect harmony! Is Eirene going to make an impact, start passive resistance or non-violent ideology? I do hope so. What I am hearing is music to my ears.