23 years after their last (and only) full length release, Empirion have returned with ‘Resume’.

Their 1996 debut ‘Advanced Technology’ yielded a substantial fanbase and a certain amount of crossover appeal. They supported the Prodigy on a European tour and played across the world before touring America in 1997 as a part of a Megadog Big Top Tour alongside the likes of Moby, 808 State and BT. 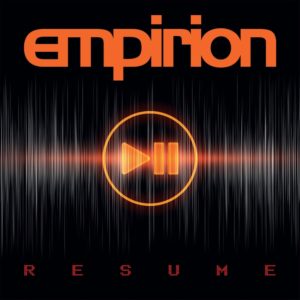 And it was actually a Megadog reunion and the offer of a Dj set that brought Empirion out of retirement and back into the studio.

‘Resume’ is a stylish hybrid of dance and industrial music. It has a marvellous old 90’s sound to it, while still keeping things fresh. It’s firmly Empirion, familiar, but also new. Lead single ‘ADSR’ is a truly wonderful concoction of elements. Starting with a driving, pounding beat and some sinister vocal and synth work, it crescendos into a glorious breakbeat.

Title track ‘Resume’ seems to have picked up some slight dubstep influences since the 90’s, and elsewhere ‘They’re In My Dreams’ takes things to fever pitch with dancefloor belter. There are some slower moments on the album, and some quieter moments. In fact they’ve managed to craft a well made album which you can come back to time and time again. Not an easy feat for an act in this genre. It’s well put together, well produced and a worthy follow up to add to their legacy.