Some groups are full of brightness and light and Erasure are one of these groups. Since the birth of the group in the 1980’s the duo have perpetually been producing wonderful catchy pop music that is still fresh to listen to in the millennium years. What’s more they refuse to hide in the shadows, they keep coming back with fresh upbeat music with their distinct signature sound. Andy Bell’s voice is still as strong and powerful. Vince Clarke still creates dynamic catchy tunes.

With this new album, The Neon, they are rejuvenated with yet more energy and drive. It’s so refreshing to hear joyous music that emanates rays of sunshine.

The Neon is a 10 track album and kicks off with ‘Hey Now [Think I Got A Feeling]’. It’s a pulsating, lively number that jumps straight in. Andy’s voice comes driving in as if he was still in his twenties! There is much confidence in his vocals and align perfectly to the rhythmic background. Our feet are tapping and our spirits are high from the off. If it set out to lift you, it certainly does. 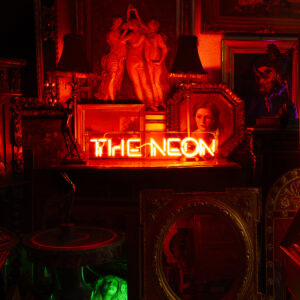 We dive into ‘Nerves of Steel’ with a different tone and sound. I love music that can change without recognising that it’s happened. This track weaves about with different tempos and high and low notes whilst Andy sings seamlessly with the creative tune. My foot is still tapping as I listen to a song not as bright as the first track, but a song with much intent. This duo shows how to produce high quality music that appears so simple but is extremely technical.

I want to get up and dance as ‘Fallen Angel’ powers in and I’m in my fifties! I would like to think this song would attract younger folk to do exactly the same. With a wonderful pounding beat, it’s a song that would fill a dance-floor within moments. I know Vince is king when it comes to jingles and his hooks work so well within a number of Erasure songs. They’ll catch you in this song as well as Andy’s sing-a-long vocals. The chorus is really catchy and I truly miss 7” singles, because I am sure this has the perfect ingredients to be one.

‘No Point in Tripping’ has a wonderful simple intro and it’s so effective. Andy’s voice comes in with the bass perfectly and there is something sultry and demanding about the pace with his voice. With wonderful, meaningful lyrics and a perpetual throbbing beat the song continues to unfold with another clever chorus. We go slightly beyond halfway and Vince is allowed to play with the music and show his musical skills. I feel at this conjuncture they are really having fun putting this song together and passing it back and forth from one to the other.

We have a real earworm with ‘Shot a Satellite’. I think it’s an instant hit. The moment you hear this song for the first time your ears prick up. There is no escape as you get drawn into the song. It’s a song you will play over and over and not get tired of. It’s a song of envy to other musicians. It’s so simple but so effective. We have another song with perfect lyrics, sung faultlessly by the voice of Erasure. With a steady, driving beat it ticks all the boxes. It’s one of those songs you’ve been waiting to hear. Now the wait is over!

‘Tower of Love’ is different and rightly so. Erasure do have the capability of creating images with their music and from the opening of this song you know you are going to be led through an audio story. Andy becomes the storyteller as he describes where he is and if you listen carefully to the words you’ll notice the double meanings. It’s a slower song with very creative textures. Listen intently to this song please!

I love the opening lyrics of ‘Diamond Lies’. Maybe the intention of putting a smile on your face from the beginning was intended? This is another fun and catchy song that gets your body reacting to its danceable intentions. I’m finding it hard to write this review with a tapping foot. What I also notice within this album is the few runaway moments Vince has with his interesting, instrumental interludes. There is one wonderful moment within this track that just bleeds out spontaneously.

With ‘New Horizons’ Andy gets a moment to sing an emotional song alongside simple piano play. It gives him the ability to show the depth of his voice. It is so difficult to imagine that this duo have not aged with the music they are able to produce.

There seems to be a need to keep pushing light out within this album and ‘Careful What I Try To Do’ is another bright song. We have a bright beat and contrasting synths as Andy’s voice flows amongst the music. It’s a song that wants you to focus on the lyrics, but probably isn’t essential because if you wish to dance along instead, I think you will be permitted!

I love the opening to ‘Kid You’re Not Alone’. It has a slighter sombre tone, but Andy’s voice excels here. He somehow transforms his voice into something otherworldly. The synths are slight in the background, but come in at exactly the right time. The beat is also subtle. It’s a very clever construction and the way Vince plays with the music is possibly sometimes eclipsed with Andy’s vocals, but this time the duo are working solidly together and it’s easy to tell they are enjoying the experience.

This album is an absolute requirement for 2020. It’s a fully rounded album and has achieved possibly what it was intending, if not more.

I can only suggest that your ears will be begging to hear this.