This release from Einsturzende Neubauten alum FM Einheit consists of several musicians recounting their dreams in spoken word against a mesmerizing soundtrack, which was originally for the 2017 exhibition of the same name. 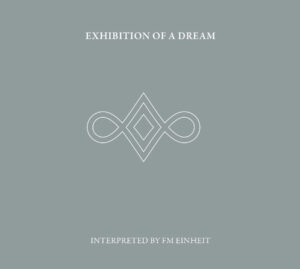 It was recorded live in the amphitheatres and the garden of the Fondation Calouste Gulbenkian in Lisbon where the exhibition was held, as well as in private at Einheit’s own studio, Steinschlag.

For those who did not see the exhibit or buy the album when it was first released, it’s now available via Cold Spring as a 6-panel 2-CD digipak. Incorporating elements of jazz, ambient, and industrial styles, the first track, “Memory”, features Einheit himself and serves as an apt introduction to this compelling piece of industrial and experimental music history. Lee Ranaldo of Sonic Youth reads on “Alpine Traum”, a swirling psychedelic jam with lines such as, “Every vision is fiction; every dream, fact.”

The album feels like the soundtrack to a strange and beautiful art show curated by Einheit and starring his friends, many of whom are likely familiar to fans of early industrial music. “Dark Dream In D” is a haunting cinematic soundscape featuring sound designer and film composer Susan Stenger’s vocals (she also plays flute and bass throughout the album and is a frequent collaborator with Robert Poss). “The Seven-Year Dream” is particularly intense, with Einheit’s background vocals and steadily building strings plucking out an ominous accompaniment.

“Dream 17 February 2017” starts off the second disc with a lively walking bass line by jazz bassist Volker Kamp and Robert Poss’s distorted guitars, increasing in tempo and intensity before crashing to a tumbling, disconcerting end. Then we enter “The Dungeon,” which is probably one of the most “industrial” tracks, featuring disembodied found sounds, chirping synths, and pounding drums. Many of the pieces on this disc use field recordings as background sounds, which give the songs a strange, displaced 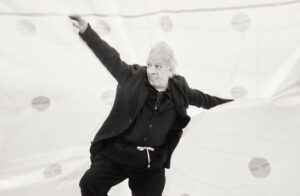 sense; you can almost tell where you’ve heard some of the sounds before…but not quite. Still, just like dreams, sometimes the sounds are beautiful, such as on “Joyful Pleasures” featuring Einheit with sound designer Susie Green.

I would be remiss not to mention the last track on the album, “Creation Recreated,” featuring the late industrial music legend and visionary, Genesis Breyer P-Orridge. A 15-minute tale of a strange land which is presumably the beginning of the earth’s origins, hearing her voice now is much like hearing a ghost. Yet, it’s also like hearing an old friend.

In fact, there’s a sense of familiarity to many of these pieces for anybody who paid attention to the beginnings of industrial music, especially by the likes of Throbbing Gristle and Einsturzende Neubauten. As much as it’s an account of dreams, it also feels like a piece of history, which is part of what makes it so fascinating.