We’re only two weeks into 2021 and this year has already started with one brilliant record. It’s Front Line Assembly’s Mechanical Soul. While receiving very little information about the album, I decided to dive straight into it and make my own opinion. What’s evident from the start is that it’s a classic FLA record which integrates synth soundscapes, driving beats and Bill’s almost mechanical vocals, and that’s something that FLA has been doing successfully for decades. The soundscapes they create are rich and layered; you can follow many different paths within a song while being stimulated by steady pulsing beats, which make some of their songs great dance floor material. FLA has never sounded excessive; they’ve always had a perfect sense of balance, and Bill’s cool 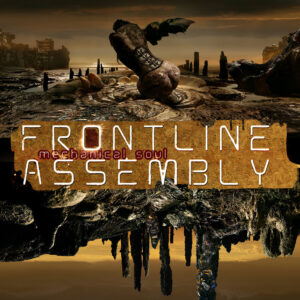 and almost robotic vocals add to a somewhat cold and impersonal atmosphere. This album is no different in that regard, which is exactly what you’d expect from a mechanical soul. Sound-wise, the album paints a very interesting picture of other-worldly landscapes and their music has always inspired all sorts of surreal scenes in my mind.

Over the years, the band has been exploring different approaches to making music. After Wake Up The Coma, which sounded fairly different to what the old diehard fans were used to, Mechanical Soul brings back the sound that’s reminiscent of the early FLA records. If you were nostalgic for their old sound, this album will be a welcome addition to your Front Line Assembly collection.

The only guitar you will hear on this album is on “Stifle”, played by Fear Factory’s Dino Cazeres. The track slowly builds into a sonic wall; it is undeniably one of the album’s pillars.

It’s difficult to choose favorite songs from a record that’s so complete and functions great as a whole; it feels like picking a few tracks would be unfair, if not impossible. The album flows naturally from one song to another. However, we cannot help but pay special attention to “Barbarians” and the recognizable voice of Jean-Luc DeMeyer (Front 242, C-Tec). Beautifully arranged synths create an utterly breathtaking soundscape and make this song the most emotional moment on the album… mechanical soul suddenly becomes more human! However, the album continues with even more mechanical “Komm, stirbt mit mir”- it’s a nice surprise to hear Bill in German for a change!

Once pioneers, now veterans, these guys stood the test of time and proved once more that they are at the very top of the EBM/industrial genre, if not higher. If for any reason you were not a huge fan of Wake Up The Coma but would rather listen to the older FLA repertoire, then this album is a must-have. For me, every FLA album is a must-have, and Mechanical Soul is definitely among my favorites.