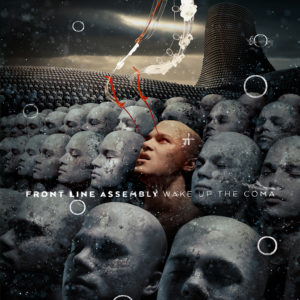 Wake Up The Coma starts off with the sinister burbling synth bass of “Eye On You”. Even before Bill Leeb’s voice comes in, you can already tell it’s them, with “Eye On You” featuring Robert Görl of DAF (one of the many special guests on this album). It marks a shift back towards their late 90’s/early 2000’s sound a bit…slightly less cinematic and atmospheric and a little more danceable, while still plenty epic. Another standout track for me is “Tilt,” a post-apocalyptic anthem with brutal synths and harsh, techno-inspired beats, as well as chilling lyrics: “Heavens alive/the sky is burning/this is the end/we’re all dying”. The title track also has incredible energy, featuring Nick Holmes of Paradise Lost in a stunning performance on lead vocals.

Better yet, there’s a really fun cover of Falco’s “Rock Me Amadeus” featuring Jimmy Urine of Mindless Self Indulgence to lighten the mood (you’ll love the video, it’s a total 80’s throwback) and an appearance by none other than Chris Connelly on the last song “Spitting Wind.” His unmistakable harmonies add a raw beauty and dissonant depth to beautifully surreal lyrics.

The album is dedicated to the late Jeremy Inkel, who passed away last January at the age of 34 and whose loss deeply shook the industrial/EBM community. Its release date falls on what would have been Inkel’s 36th birthday. His programming is featured on “Mesmerized” and “Structures.” The programming on this album as a whole is refreshingly diverse and creative. Touring keyboardist Jeff Swearengin contributed to “Tilt” and “Spitting Winds,” who you can hear more of in his solo project Sleep Clinic. FLA vets Jared Slingerland  and Sasha Keevil also had a heavy hand in production and programming.

Wake Up The Coma showcases Leeb’s lyrical and vocal style perfectly as well as his uncanny ability to surround himself with such talent, including, of course, longtime member Rhys Fulber, whose solo album and performances at Cold Waves Festival this year were also incredibly innovative. For both new and old fans, this album is a must-have!