Founded in Florida back in 2003, God Module has been the solo project of Jasyn Bangert for some time now. Nine studio albums and a number of EPs, he has brought the sounds of industrial, harsh techno and darkwave to create a constantly mutating sound.
Blending themes of emotional horror and introspection with driving, dark yet danceable EBM, 2019’s ‘The Unsound’ has had the reworking 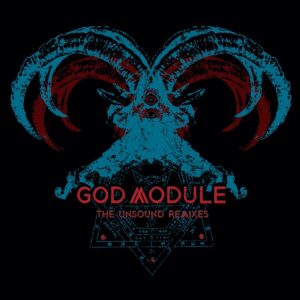 treatment with remixes by Iris, ESA, System Syn, Funker Vogt, Velvet Acid Christ, Ghostfeeder, Rodney Anonymous (Dead Milkmen/7th Victim) and more.
Now I have to be honest, I usually see the remix album as a bit of a lazy addition to a musical catalogue. And this is coming from someone who’s made two himself. Sure it can be interesting for the listener, but it’s never quite the new and exciting hit you get from an original body of work. It also presents me with a conundrum, in that if the remix is not as good as the original then one thinks “why make this?”. And if it is better than the original it just makes the original look a bit shit. But is a song ever finished? Maybe it’s supposed to keep on trucking and evolve and the remix album is the ideal place to do that.
Most of this album is going to be spinning at goth clubs. It’s an uptempo, dark and pounding offering that will get the dance floor going. Which is good in it’s own right if that’s your bag, but when the source material was pretty full on anyway it somewhat limits where you can take it with a remix. A few tracks on this have really nailed it though. The dark and slow brooding of Iris, the unsettling lurching around of Baby Magick and the breakbeat reworking by Finite Automata is a fine listen. The Ghostfeeder remix of Grey Forces takes the cake though. It’s a tremendous mix of ambient synths, subtle soundscapes and a minimalist beat surrounding a well constructed track. There’s some great tones and nuances in there.