I have recently been introduced to I Like Trains and after hearing ‘The Truth’ on Bandcamp and the musical style, I recognised immediately was the irony and wit this group have. My first feeling was that they were similar to the Divine Comedy. Not being familiar with the vocalist David Martin, I thought I was going to hear singing, but there are some that do a terrific job with spoken word and the way they articulate themselves and drive the message home. I Like Trains have not released an album for 8 years and it’ll become obvious that Kompromat reflects such a contrast to the world we are now living. There is some fantastic music being played on this album, the intentional mood bang on. I would like to review this album from a subtle approach. Some people have become anxious and stressed by recent events. This album doesn’t amplify the messages, but just spells them out with dark humour, intended or not. Artists will always need to express themselves and spending time to see how humanity has been ‘evolving’ or being ‘manipulated’ is something that many haven’t taken notice of. Releasing this album now is very 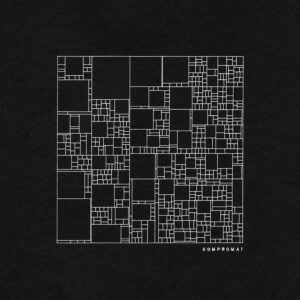 crucial, possibly the most open and raw reveals of our time. I’ve read that Martin didn’t set out to write a record about current affairs but paths converged with daily discourse. I see this as possibly fate intervening. I see that with the elevation of the tracks and love being given the opportunity to look back on a short piece of our time to notice the huge changes that have taken place. ‘A Steady Hand’ is a great song to start with. Nothing is going to grip you and pull you in better than this, the dark undertones and sly synths painting the scene. As soon as the vocals kick in, you know you are going to have to sit up and listen. I love those raw guitar streaks unsettling my conscience as the song moves forwards. Oh boy, is this song so clever. The next track ‘Desire is a Mess’ pulsates into life and there are hints of those terrifying guitar screeches in the background. It’s a lively track with lyrics that are going to make many songwriters envious. Martin’s spoken word style has a different expression here, the tones and intentions coming through very powerfully. There is something Pulp or Jarvis Cocker here and I love artists with passion who see the world as it. ‘Dig In’ has a little twist where it starts with a tune you feel you have heard before. It’s much more straightforward and the lyrics more simple, but I love the way the song unfolds and the chorus. You can really dig it! It’s an addictive catchy number, but that wit is never going away. The words are still pertinent. The more I listen to this album, I hear much more. My ears have pricked up several times after listening to ‘PRISM’. This song captures the empathy, not just with the words, but the music itself and sends shivers up my spine. I believe that music is alive and well in 2020 and this album might well make the biggest mark on this year. It’s an album that needs to be listened to. I don’t think anyone needs to be told ‘Patience is a Virtue’ but seeing that I Like Trains are going to tell you, it’s worth taking note. It’s a fast paced little number with haunting chords throughout. The drumming carries the song through at a beautiful pace. I still love the guitars. ‘A Man of Conviction’ has a lovely build. I love the different tempos to slow or speed up the album. This one takes the foot off the pedal a bit at the front end, but somehow Martin’s voice is compelled to express his passion. There’s a wide range of vocal that doesn’t seem so apparent initially, but is so cleverly done. This track is so well structured. It becomes a foot tapping pleasure ride with another great underlying message. Strumming guitars as an intro is always a good thing. This is how ‘New Geography’ kicks off. This song is more gentle and passionate. Martin’s voice lower and riding the guitars. It becomes a consuming mixture of intertwining musical genius and physical understanding as the song culminates into a beautiful, emotional crescendo. We fall into the penultimate track ‘The Truth’. What grabbed me upon first listen was the powerful lyrics, not sung with irony, but meant as such. The truth is that you can interpret this song without being forced to think one way or another. The guitars and drums carry the song perfectly and have some amazing structured pieces along the way. I recommend this track highly. ‘Eyes to the Left’ brings us to the close of the album. It sweeps in with low synths and glides gently across the ether. I detect chord changes and a female voice that sounds like the ghost of Margaret Thatcher. I suppose when you listen to the lyrics you will make your own judgement. Though, when the voice fades and the synths diminish we come smashing into the song beyond the halfway mark. The drums come crashing and Martin’s voice holds a colourful sarcasm perhaps? It is a very well thought out album with high production. The album that shouts 2020 has arrived.