My ears first heard IAMWARFACE several years back now whilst listening to Chris Watt’s ‘In the Moog’ NCCR radio show. Chris is a big supporter to many artists and hosts a regular show every Wednesday night. One week it is a retro show, the following week it’s a show supporting new artists. On this particular occasion when I heard IAMWARFACE I thought I was listening to the retro show, because the song ‘Say My Name’ felt like a song I’d heard before and everything about it was timeless. Literally a few weeks later, I was so struck by that track I had the chance to visit The Square, Harlow late 2016 and hear IAMWARFACE for the first time live. I could not believe they were a support band, their stage presence was electric and they did nothing other than captivate the audience. Their set received a better reception than the headliner. You could tell you were watching a band with a promising future. Bringing things up to 2019, the long awaited album ’Year of the Dragon’ has finally hit the shelves and online stores, also available on Spotify. There is no reason not to feast your ears on this wonderful album. The album is also available on Vinyl and has been selling very well. Not surprising because it is a phenomenal debut. ‘Say my Name’ kicks the title off. I would not be the first to say it sounds like something from a James Bond Movie. I love the intro especially, from a low guitar riff to an elevated volume through the introduction of bass and drums. Being unique is the game. Matt’s voice is nothing but acoustically pleasing. Add this to the pounding melody and accompanying vocals, the lyrics and sing-a-long chorus and you have a killer tune. When it 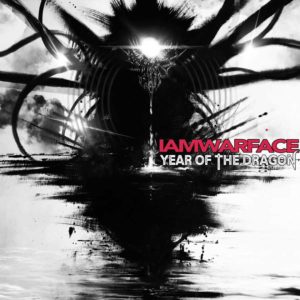 comes to “You don’t Love me Anymore’ it’s a full onslaught. It’s high emotions, a relentless beat and a driving rhythm. They get close to sounding like the Kaiser Chiefs here, but no way trying to imitate. Matt’s vocals reach extraordinary heights, but he manages to curl his voice around the instrumentation and create seamless art. ‘To Die For’ is one of those songs that says what it means. Matt’s lyrics are always thought provoking. The strength of this track and its structure is on par with ‘Say My Name’ but it is totally raw. IAMWARFACE want you to listen to the words and join in with empathy. A very solid track that I have heard many times. It’s a banger. Many of the tracks on this album have been circulating around for a bit and seeing this group several times over the last few years, I have heard ‘Fear the Future’ on an occasion or two. The track is probably more relevant now, than any other time. The video tells the story well and it’s very disturbing. A track that opens to drum beats alone and then we enter the dark, dystopian sounds and vocals that take us on an upbeat, but gloomy outlook to the world we are living in. It’s a mighty track that fits so well. I have a friend who heard ‘Closer’ as one of his first introductions to IAMWARFACE. He said that ‘Closer’ was like an earworm. He could not stop playing it. What an emotional, energy charged song. You will be hard pressed to discover a more stronger, sentimental piece of music. With powerful lyrics yet again and wonderful guitar strings to boot. Two minutes in and you are confronted with a riff like nothing you have heard before. It just sends shivers up your spine. This is an awesome must listen to song. I wouldn’t want to speculate what ‘Get So High’ is about, but it’s another classic IAMWARFACE track. The fusion of Matt’s voice and his band’s instruments gel so well. Everyone is contributing to make something beyond music. It really is audio art. The more you listen to the tracks, the more you hear. Each and every track is so solid that you want to go back and re-listen. There hasn’t been anyone I have introduced to the band that hasn’t enjoyed the music. When it comes to “Atomic White Gold’, I know this to be one of Matt’s favourites. It has a very deep bass line and keeps you on edge for a while. If you listen carefully the steady bass escalates in the background and by mid track, vocals and percussion culminate into an explosion that becomes the chorus. It’s another track that carries dark mischievousness but very cleverly done. Back in 2016, IAMWARFACE only had a small amount of songs, but another of those early songs was ‘Bleed Out’. The group have a very interesting way to make their music sound exquisite. They appear like a rock band, behave in ways like a rock band, but produce sounds that aren’t like your usual rock. IAMWARFACE are a new breed of musician. This track is up there with their best material and adds a dimension of edgy darkness from the moment them first electronic sounds start to rumble. With very catchy lyrics and another audience pleaser. ‘Red Queen’ does dig deeper into the band’s more rockier side. It has a nice metal start and Matt’s voice allows himself to get drowned out a little by the relentless drums and guitars vying for supremacy. But this is another classic and the ‘Red Queen’ is the chorus. It fits sublimely and sets up the final track on the album perfectly. ‘Trigons’ is one of my personal favourites. I was captivated the first time I saw it being performed. More of an electronic instrumental piece, Matt has often stepped down off the stage and danced amongst the audience during the first few minutes of this track. But it truly is a corker. It has such a wonderful weirdness and sonic beat about it. You feel like you are elevating to a higher level. This album is a classic in every sense and if it goes unnoticed by anyone who says they like music, then the injustice will be with the listener. Tune in, download, buy, beg or steal this album. You have been warned. See them live and you’ll see an audience like no other. The impeccable vocalist of IAMWARFACE is Matt Warneford. He is supported by Louis Matthews on lead, Mike Smith on bass, Tom Howe on keyboards and Adam Stanley on drums. They work together like brothers and create amazing music. This is the debut album. This is only the beginning.