Los Angeles Electro Industrial band Imperative Reaction have returned after ten years with their strongest and critically acclaimed album to date, Mirror. Comprised of 11 songs which combine EBM with a post-industrial sound, this magnum opus explores themes of aggression, intimidation, and self-discovery.

Mirror opens with the energetic track “Split”. A pounding, aggressive beat dominates throughout the heart of the album, urging us to dance and express our shared pain in songs such as “Like Swine” and “The Scales”. Starting with a seductively gritty opening, it creates an adventurous sense of mystery and allure. 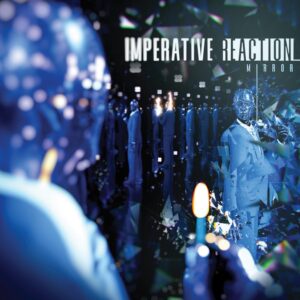 The punchy “Alter Ego” brings to mind the industrial angst and nostalgia of Nine Inch Nails, combined with modern-sounding lead synths found in similar acts such as Combichrist and Aesthetic Perfection.

The lyrics balance many different themes, such as reminiscence in “Where Here Is Somewhere Else” and “Glass”, as well as duality and nihilism on songs such as “Ignite,” which expresses emotions with an untamable fire. Singer Ted Phelps’ authoritative voice makes its presence noticeable in each story told, especially in “Intertwined” and in the heart-wrenching, melancholy masterpiece “Disavow”, where the layer of synths compliment the melody of the lead vocals. The album ends on the impactful closing song “Half Of One”, bringing us a post-darkwave melody executed gracefully by the programmed electronics, and balancing the soft dynamics with the energetic lyrics and beats.

In taking a new and more diverse direction with their sound, this album showcases the evolution of the band’s songwriting ability as well as their willingness to fearlessly combine malice with vulnerability. The band is still recognizable, yet within a new identity.

Imperative Reaction’s return is a strong beginning of what’s to come from the industrial/EBM genre this year. The well-developed moodiness and the album’s industrial and minimum wave influences are key elements for its success.

Mirror is released on January 15, 2021 via Metropolis Records.

Recommended songs: “When Here Is Somewhere Else”, “Alter Ego”, “Like Swine”, “Half Of One”