Following their debut album Passive With Desire from 2016, Choir Boy are back this year with a new full length album Gathering Swans. Gathering Swans shows the band’s creative evolution, both lyrically and music wise. There have been changes in the line-up as well, which resulted in a superior release. Even though the feelings of melancholy and nostalgia are present throughout the album, I feel extremely positive and absolutely passionate about it. With the album due for the release on 8 May, I thought it was a good time to get in touch with the songwriter and frontman Adam Klopp. 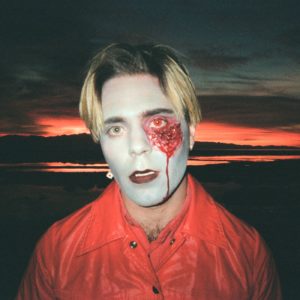 1. Hi Adam! I have only but the best to say about Gathering Swans. I sense a certain distancing and departure from Passive With Desire. Can you tell us what’s changed in the past 4 years in the creative sense?

Adam: Hi! Thank you! I think the main departure from Passive With Desire is the lyrical tone. The last record was quite morose and self serious. It felt more effective this time around to weave some humor into the songs.

2. Melancholia and nostalgia are present on this album as well. Where do those feelings come from? Do you feel they are a catalyst for your creativity?

Adam: I imagine everyone deals with those things, especially nostalgia. I suppose it comes from growing older and feeling like you’ve lost something you can never regain. It’s definitely a catalyst for creativity.

3. What was the focus of your writing for Gathering Swans? What’s the narrative of the album in the lyrical sense?

Adam: I’ve joked a few times that the record is a sarcastic self help manual for overcoming nihilism. It jabs at my personal cynicism and analyzes the existential utility of romantic love.

4. There are some who draw comparisons with Brian Ferry, Kate Bush, The Cure. Yet I hear echoes of China Crisis, The Smiths and even Cocteau Twins in this album. Is that just my imagination?

Adam: Not at all. Those are some of our collective favorite bands, so naturally we tend to draw from that sonic pool.

5. The album is reminiscent of the 80s synth pop, dream pop, indie alternative, post-punk. Is that the music that moves you and inspires you? What’s your opinion on those styles?

Adam: I’m a fan of many bands that would land in the intersections those genres, and yes I’m moved and inspired by a lot of that music. I think the 80s was an innovative decade for music, perhaps because of the growing accessibility of new technology (synthesizers, sequencers, effects, etc). I think there are a lot of social/political parallels between then and now as well, which perhaps explains the modern resurgence of those styles.

6. You already have 2 videos from this album: “Toxic Eye” and “Complainer”. The videos were not at all what I would expect. What’s the story behind them? What I really want to know is why you’re almost naked in chains?!

Adam: With music videos, I like to create characters that personify certain themes or ideas in the music. It’s a fun visual extension. Lately my goal has been to look like I’m an unknown comic book villain. I like to be grotesque and glamorous at the same time. For the “Complainer” video, we wanted it to look like 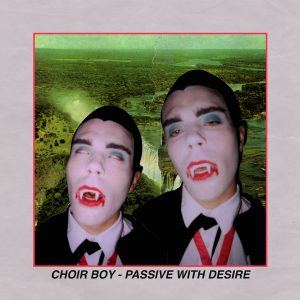 we were part of a back alley fight club. We filmed a large chunk of it in front of a dumpster in the middle of winter. The chains were ice cold and very heavy. The idea was that I should actually be suffering while trying to perform.

7. Speaking of visuals, how did the vampire imagery fit into the concept of Passive With Desire?

Adam: I love vampires! They fit my description above – simultaneously grotesque and glamorous. There’s ample use of vampire imagery and metaphors throughout that record.

8. Since I know very little about you, I must ask, why Choir Boy? How did you come up with that name?

Adam: It was something someone called me as an insult as teenager playing shows in the local diy/punk scene. I was raised in a devout religious household and I actually did sing in church and school choirs growing up. I thought it would be a funny and apt musical moniker.

9. Who are Choir boy at the moment? Can you tell me about the current line-up and who your bandmates are?

10. How are the other members involved in the creative process?

Adam: Everyone contributes to the process, but it varies from song to song. Generally, I’ll propose a song concept or a vocal melody that we’ll then workshop to completion. We’ll bounce back and forth between private demoing and sessions as a full band. On “Complainer” however, Chaz sent me an instrumental demo with the guitar hook and bass line first. I reworked the drum sequence a bit and then walked around town with the demo on repeat, singing different melodies over it until it clicked.

11. My favourite song from the album is probably “Shatter”. It is probably the strongest song on the album. I absolutely love the 80s classic pop sound. Can you tell us more about the song and what it’s about?

Adam: I actually started writing that song a while back with my friend Jared who played synths in Choir Boy prior to Jeff. The song sat in limbo for over a year before we reconstructed for the record. The lyrics point to an over arching theme, referencing my personal struggle redefining/rediscovering wonder and purpose in life. In the first verse, I wanted it to evoke an image of someone waiting in line at some sort of spiritual DMV, all of their confusing paperwork in hand, trying to sort out their life problems. “We are hear to ask some questions, and I think I will start with ‘Why? Why bother? And what does it matter? With no purpose I will turn to glass, with no morals I will shatter.”

12. “It’s Over” is another track I love very much. It’s a great introduction to the album. How did you decide on the track order?

Adam: The record was sequenced so each song would have a call and response relationship to a correlating song on the opposite side of the record. “It’s Over” is part of a nonlinear romantic narrative, oscillating between infatuation and disillusionment. It seemed dramatic to begin the record with a character at the end of their rope with love. As the record continues from A-side to B-side, “It’s Over” is mirrored by “Sweet Candy” which discusses romance from a much different perspective.

13. “Eat The Frog” is a very catchy song with a witty title; I would say it’s the least melancholic. What’s the message of the song? What are you referring to with the title?

Adam: Yeah, that is definitely one of the more light hearted tunes. The title refers to a phrase coined by Mark Twain that advises beginning the day with your most loathsome chore. I struggle with day to day operations, so I was trying to give myself some advice. 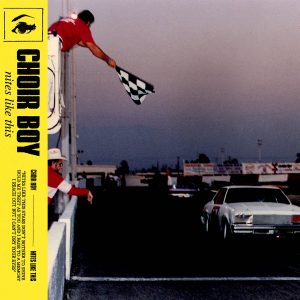 14. People could already hear “Nites Like This”, “Toxic Eye” and “Complainer”. How pleased are you with the feedback?

Adam: Some people really like it! It feels nice when people enjoy something you’ve made.

15. What do you think about making music in 2020? How difficult or easy it is for a new band to reach their target audience in this age?

Adam: Social media and streaming have made it easier than ever to access music and to have an audience. On some level I enjoy being part of a world where access to music and subculture isn’t cost restrictive. However, endless accessibility devalues the whole experience. It’s a double edged sword. 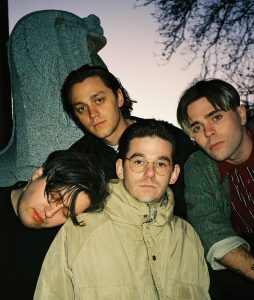 16. It will be a while until we’re able to see you live as the shows are postponed due to the pandemic. Can you tell us what one can expect from your live performance? How would you describe a good gig?

17. You will surely find out how others feel about the album very soon. How do you feel about it?

Adam: I go back and forth! I’ll occasionally do some quality control and listen to a parts of the album while walking my dog. Sometimes I’m quite proud of it, sometimes it sounds like garbage to me. I’m very self critical with that stuff.