An ingenious concept album composing of 22 Letters in music! Imagine that the human race has become extinct and that all that is left are these remnants to disclose who we were. Each of the 22 tracks sung by different artists. Their interpretation has put a unique take on the task that was given to them to create a very rich and full album with empathy and love. This is a lovely mixture of male and female artists with different styles. Most of the tracks are ambient with interesting composures and flowing rhythms. The album in full tells quite a beautiful tale of what humanity stands for and creates many images and personal interpretations to the listener. I always prefer to listen to an album in the order it’s released and this really works well. As the tracks interflow between male and female vocals and the tempos increase and decrease they drive the listener onwards with different emotions. I think that the choosing of each artist was carefully planned with the knowledge that these artists could add their own individual dynamic input. Hearing a faster, airier track like the Letter from Mari Kattman and then cascading into the following track by JP Aston is genius. The simplicity of JP Aston’s casual, almost spoken voice with little accompaniment works tremendously well. It flows like a musical poem and the introduction of instruments when needed to build and swell works so sell. I am not ignoring some artists intentionally whilst writing this review. I would love the listener to capture the essence of what I am trying to explain as a mater of course. You cannot fail to love the vocals of Emma Barson for instance. Then hearing Coline Wauters sing her ‘Letter’ in French adds that much needed dimension. The human race after all comprises of many different languages. I think it’s not difficult to fall in love with a 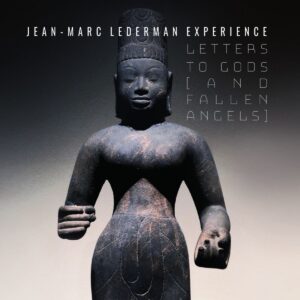 female voice singing in French. It’s an adorable song. That’s literally followed by a lovely spoken tale by Christina Z. This really draws me to the comparison of Jeff Wayne’s War of the Worlds. It’s not difficult to imagine the scenes. Again the music works well to add to the atmosphere. Then Das Vintage throws in a rap song. This really goes to show how well thought out the idea of this album was. How could you tell the story you wish to convey without showing the different genres? I love the silky voice of Lucia Fairfull with a very soft and upbeat song. She conveys confidence and strength lyrically with a powerful voice that somehow seems suppressed to perfection. You really need to listen to her to fully appreciate and understand. By the time Stefan Netschio sings, we are close to the halfway mark and the album is really becoming a driving force. There is a recognisable gain in the songs and tones. I think this letter really invigorates the brain and sets you alight. There is a possible competitive edge when different artists are bringing their songs to an arena like this and it is difficult as a reviewer to say that each artist is the same. This is clearly not the case and from my perspective each artist I have listened to up to this point has brought exactly what they needed to make this album become what it is. I have only ever reviewed music that deserves to be highlighted. As the journey progresses to the centre of the project Hunter S. Thompson and Elena Alice Fossi add two very interesting and different female vocals. Hunter brings a sinister edge to the mix and Elena has a wonderful lull. I always find that when I hear a singer sing like this, it’s like creating magic. How can a mortal sing like an angel and so ethereal? Tom Shear’s starts with an interesting instrumental intro and this will always attract me. I strongly advocate a musician to remain true and tell the story with a start, middle and end. We don’t have to pander to the mainstream media, that element of music has lost the plot? A song that must start with a vocal immediately to gain attention is a modern phenomenon only to connect with people who don’t understand the concept of music. Tom’s song is a very powerful and direct song. I love it. Another element of modern mainstream music is funnelling all the singers to sound the same. A true connoisseur of music would immediately recognise that a singer such as Mark Hockings has an exquisite and unique voice. You cannot neglect this and fortunately he wasn’t ignored for his wonderful contribution to this album. There is a Pulp vibe, but definitely his own style. When Jenna Fearon enters your consciousness, she caresses your ears. What a beautiful, warm drawl. There’s such a steady and low instrumental support that appears audibly like a log fire in the background. This track is a work of art. Emileigh Rohn almost makes me sound like a hypocrite with my previous words on vocals entering a song early, but she does linger for a second before sweeping in. This voice floats in like a gentle breeze through an open window. My point of playing an album in order is thus. The impact the musician wants to impress upon his audience would not work in any other way. The diverse songs and the different artists are threading their way through an amazing story that unfolds into what appears to be art mixed with intelligence. As the album moves forward and we come across songs by Haydn Park-Patterson & Rodney Orpheus we drift into solid songs with different rich tones and support from the male artists. Louise Fraser adds a different female perspective. This is a bold production that has hints of a bygone era and swirls and glides around your ears; another glorious voice. Lis van den Akker letter brings with it elements of intrigue and mischievousness. I love the piano play and soft strings as they build towards her entrance. There is yet more soul searching and empathy here. You cannot fail to recognise that if an artist is allowed to play, they’ll end up making a wonderful and interesting piece of music and this track is very creative. It’s so stunning and clever. Claus Larsen has the beauty of adding art and interesting sound to his song. An artist not following convention will always grab my attention. A great song to end with… Of course, I didn’t mention this before, but the album starts and finishes with an intro and outro. Encapsulating this project such as this really makes this album a full rounded experience. If humanity were to be lost, this album captures our loss brilliantly.