I had the pleasure of speaking with the multi-talented Joe Crudgington recently, frontman of UK/LA industrial rock newcomers Drownd, who have recently joined the Armalyte Records roster just in time for an exciting summer of new music. Check the links below for Drownd’s new album and music video for “Sick Like You.”

How did you guys hook up with Armalyte and who are your other favorite Armalyte bands? 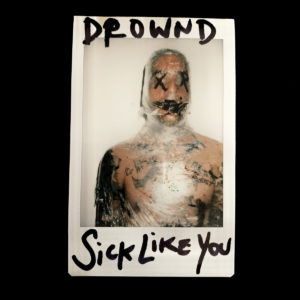 Joe: Basically I’d put the track (Sick Like You) and video out myself right at the start of the year and it got a really good response, really quickly – it even charted in the top 100 of the iTunes electronic division too haha… So because of this I started pitching it about to different people and labels that I liked and was lucky that Armalyte picked up on it literally straight away. I met the fellas in London, we got on, they liked my proposed plan for the band, the rest is history! I’ve always been aware of Armalyte and liked what they stand for and the bands/artists they work with – favourites of mine being <PIG>, Cubanate, Chemlab, etc – though ALL the bands on their roster are great and unique acts in their own way. Seething Akira are a wicked band on their roster too and remixed a track for me on the EP and The Joy Thieves are one to watch out for too, who were also kind enough to do a remix for me. A really cool label to be a part of and run by super passionate and helpful guys who only want the best for the acts they work with.

Do you consider yourselves industrial? I feel like that’s always a loaded question! Who would you say are your biggest musical influences?

Joe: I absolutely know what you mean… People seem very precious about what they’d term ‘industrial’ – I don’t really know what I fit into. I definitely love industrial music and take a lot of inspiration from it in terms of sound design, sampling, imagery etc, but I wouldn’t say that I was entirely ‘inudstrial’. In fact I’ve been tagging my stuff up as ‘Undustrial’ just to avoid any possible flack and the fact that it sounds cool! Ah man, biggest influences for me would be Nine Inch Nails, Marilyn Manson, 3Teeth, Skinny Puppy, Throbbing Gristle, Ho99o9, a lot of hard drum and bass stuff from producers like Noisia, Current Value, Forbidden Society etc. Also recently – the band SKYND have given me a lot of inspiration in terms of masses of hard work and thought put into launching a band, also managed to catch HEALTH in Prague (hopefully soon in LA too with Youth Code!) a little while back and they were phenomenal live. I could go on forever!

Speaking of industrial, have you seen Industrial Accident, the Wax Trax documentary film? What did you think of it? 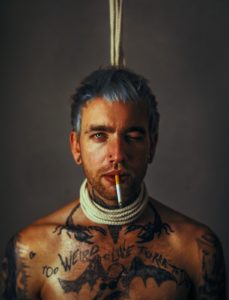 Joe: I’m embarrassed to say that I haven’t actually watched the film in it’s entirety and I’ve also had tickets for the recent LA showing and a London one a while back and for whatever reason, not been able to attend. BUT, I’m gonna rectify that as from what I have seen, I think it is great for alternative music lovers – I mean, the whole story of it! Just great that a couple of guys set up a label and shop in Chicago and kinda curated a scene that possibly felt completely unobtainable and alien to many and made it possible.

Did you start Drownd as a solo project? I thought I read somewhere that in addition to vocals, you played all the instruments on the album yourself. (Impressive!) Who’s in the live band and how do you all know each other?

Joe: I’ve been doing music for a while now and been in a few different bands – mine and others, and I’ve always just felt more comfortable writing everything and on my own. I’ve always had the intention of performing it live as an actual band as I feel that with the majority of live music, you NEED a band up there with you – for energy, stage presence and sound. I mean, even with loads of electronics going and drum samples, you still need a live drums to cut through and live guitar still adds massively in my opinion. But getting back to your first question, yeah, I do the whole lot myself, write it, record it, mix / produce it etc – it allows me to be ‘me’ that way I think and not be potentially embarrassed about any ideas or themes that might be going on in my mad mind at the time. 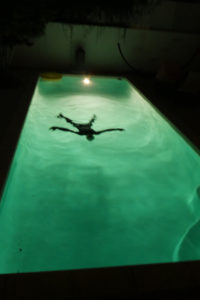 As for the live band, the line-up will kinda circulate a bit depending on the others’ commitments at the time of gigs (they’re in other bands too) but my drummer, Paul Traveller is my go to drummer – solid as a rock and super talented. I’ve known him for well over 5-6 (maybe more!?) years now and we met at a rehearsal studio where he was working and I was rehearsing with another project, he heard my stuff, dug it, we got on and ended up becoming friends. Without rattling on too much, the other guys in the band are also featured in the video with lil Sophia Doe (gas mask girl haha) on guitar along with crazy Tom Hancock on guitar too, with Matt Sutton (lipstick man) on bass guitar. Jon Easthope will occasionally add percussion or be in charge of stage ‘management’ in terms of lighting and curating a live set. Quite a bit of history between the lot of us and it’ll make for one hell of a show, that’s for sure!

Tell us about making the “Sick Like You” video. I love it, it has such a 90s industrial vibe! The fishnet, the gas masks, the nudity, the blood, then the sort of jittery editing style (stop-motion?)…it must have been a fun one, right?

Joe: Thanks man! It was basically just a weird idea I had – one that could be one cheap, weird and done by me! It was all filmed back at my warehouse flat in Hackney Wick when I was back in London – I basically got all the footage filmed on an IPhone, purchased Adobe PP (which I’d never even used before) and started blindly editing a video for my track! There was no real editing ‘style’ – more so just learning through making mistakes and happy accidents when putting and chopping the footage all together! It was definitely fun to make though for sure, 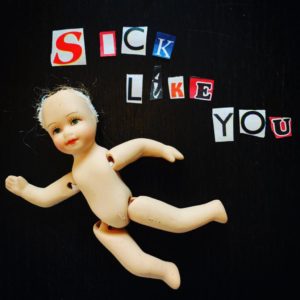 basically supplying everyone with drink, getting loose and acting weird haha… I’m looking forward to working on my next video that’s for sure – it’s got a lot to live up to after this one!

What’s it like living in LA and being from London? I visited London last summer and loved it, but it’s definitely a stark contrast to the US and especially California. What do you think so far?

Joe: That’s a funny one – I’ve been to LA a few times before, but obviously in a ‘party’ kinda vibe, so living here is definitely different. It’s a crazy place for sure and I do love it – especially the weather, it just makes the world a better place when the sun is out! I love the variety of it here too. I love DTLA (Downtown LA), then there’s the difference of Hollywood, Venice, Santa Monica, etc – soooo much going on. Also, everyone that I’ve met so far here is hugely helpful and wants to work together – I always found people back home sometimes a bit ‘precious’ of contacts, or not really wanting to work together, but over here, it’s different – in my limited experience so far obviously! I do love and miss London though (not the weather so much…), but I’ll be back and forth because I’ll be playing guitar for Sulpher for their upcoming shows in the UK. So I get to flit back and forth playing with them and still working with people back in London…I get the best of both worlds!

Tell us a fun fact about yourself.

Joe: I like listening to Tatu and I have a Sausage dog / Dachshund called Pig.