From the very first cracking rimshot of the snare on “Dub Light” I knew this was an album that I’ve wanted for decades. If you, like me, have a soft spot for the UAIOE and Don’t Blow Your Top days, this one’s for you…just like the Kap’n says. It’s a testament to KMFDM’s versatility and songwriting that both newer and older songs can be translated so well into groove-heavy, rock-steady dub. Lucia’s vocals shine even harder on “Superhero Dub” and “Amnesia 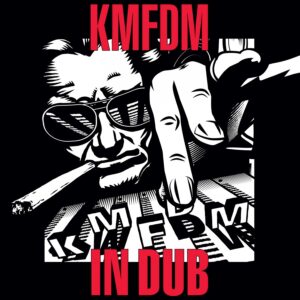 Dub”. Guitarist Andee Blacksugar’s chops add an extra special something on “A Dub Against War” and “Hau Dub,” the latter translating from a brutal fist-waving stomper to a glitched-out head nod. And the freestyling fire-spitting of rapper Andrew “Ocelot” Lindsley (who opened for them on their Hell Yeah! tour and contributed to their latest album Paradise) takes “K-M-F-DUB” to new levels, which was originally K-M-F-D” on Paradise. With a relentless bass and brass groove, an already ferocious track has even more clout behind it. Another one of my favorites is “Bumaye Dub,” originally “Bumaye” from the super-heavy Touhuvabohu where the chorus becomes almost playful, in contrast to the original track’s darkness. As usual, the artwork by Aidan Hughes aka Brute makes it even better…the KMFDM logo becomes faders on a mixing console as a cigarette-smoking, aviator sunglasses-wearing Kapt’n K raises the levels. The album is dedicated to one of Sascha Konietzko’s family members as well as to the late great Bill Rieflin. For the old school fans, if you’re Team Angst and love the heavier beats, this might take a little warming up to. For the OLD old school fans who remember where KMFDM started, you’ll probably love it. And if you’re new to KMFDM, this will make you appreciate how wide their influences stretch. In any case, this is an album many of us have been waiting for ever since the old days when Wax Trax was the place to be, or even a few years later when “Juke Joint Jezebel” was everywhere. And in these times of such darkness and horror, it’s great to just have something so fun. True to their word, the beat remains ultra-heavy, even in dub.