KMFDM is a name every industrial music fan will recognize easily. Since their inception in 1984, they’ve been one of the trailblazers of the genre, giving fans new twists and refreshing takes on industrial while also giving them the heavy, loud beats they know and love. With a revolving door of collaborators and a lineup in constant evolution, KMFDM is a great example of both how flexible industrial music can be, and how a well-established band can always benefit from more talent. After a career spanning three and a half decades, the band has released their latest album, “Paradise”, a couple weeks ago. Their 21st musical offering to fans old and new has so far been well-received, in part thanks to their solid lineup and their unexpected additions to certain songs. Fans are always left pleasantly surprised by new KMFDM releases and this album is certainly no exception. We recently had a chance to talk to the man himself, KMFDM founder and frontman Sascha Konietzko, about “Paradise” and the creative process behind it, on their ongoing collaborations, the band’s path so far, and more. Here’s what he had to share with us… 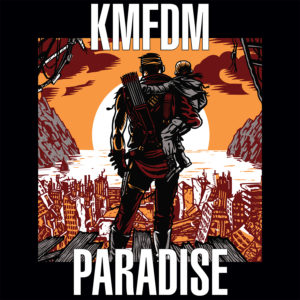 1. Your latest album Paradise has been out for a couple weeks now, and from what I’ve read and heard (and written!), the reception has been overwhelmingly positive. Are you pleased with the feedback you’ve received from fans and reviewers so far?

Sascha: Once I’ve finished working on something, i am done with it. I nurtured a social media presence in the build-up to the release of PARADISE, then deleted myself once it was actually released. So I’m not getting any feedback or anything, because i don’t really give a damn what anyone thinks about it… I wouldn’t put it out there unless it met my standards, and I’m setting the bar higher with each release.

2. The album’s title track is very direct in its message and doesn’t beat around the bush, it’s as much a call to arms for the world at large to change as it is a callout towards the very people who’ve made it into what it’s become. What are your thoughts on everything that’s going on in the world right now?

Sascha: That’s a BIG question, or is it?

The degree to which people have become dependent on the internet, and social media in particular, is staggering. Complete idiocy has become the norm, from the very top to the lowest depths of the food chain.

And i thought it was frightening living thru the 70’s and 80’s in a divided Germany where everybody was acutely aware that nuclear holocaust was round the corner, each and every day.

3. Judging from what I’ve seen in KMFDM fan circles and even among industrial fans in general recently, it seems like there’s a lot of fans who want bands to keep politics out of their music, and it’s led to some very polarizing discussions and quite a few arguments. How do you feel about that? Do you think it’s even feasible anymore to keep politics away from industrial music entirely, considering the history behind the genre and what the music has stood for, both in the past and today?

Sascha: I dunno, i never identified with the label ‘industrial’, KMFDM’s output is spanning across several genres, perhaps too many to become pigeon holed.

The fact that some people need to argue about whether our lyrics are ‘too’ political, and if so, which ‘side’ do we take, is testimony to the idiocy i was talking about earlier. It’s not about taking sides anymore, it’s about survival by now. There are too many people in this world that have their heads really far up their own asses. 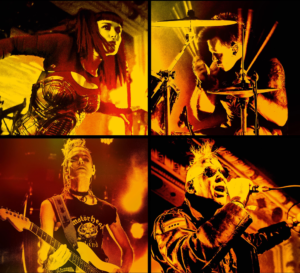 4. I’m curious about “Megalo”, your new take on your old classic “Megalomaniac”. It’s not the first time you reuse lyrics or even record new versions of your older songs, but how did you end up picking “Megalomaniac”? Is there another song you’d like to re-work in a similar fashion?

Sascha: I was working on that track, coming up with the musical bits and somehow the words for MEGALOMANIAC crept into my head each time i was listening to it. There wasn’t anything more to it. I am looking at it as an ‘update’ of the original version of the song. Or a remix…

5. Speaking of reusing lyrics… a line in “No Regret” caught my attention: “I am the finger on the trigger/Of the gun in your head”. I noticed it was a nearly word-for-word reference to a line in “Finger on the Trigger” from your former project Excessive Force, and I’m sure I’m not the only one who caught that. Do you think you’ll ever bring Excessive Force back, or perhaps work on a similar project?

I don’t think bringing anything back is necessary. EXCESSIVE FORCE was a station on the way. The way is the goal, as they say. So were other projects i/we did on the side, mdfmk, KGC, SCHWEIN and whatever else there was… no need to look back, rather see what the future will bring.

6. KMFDM is known for their frequent collaborations with other musicians, and I personally love it; it keeps things fresh and brings something new to the table every time. How do the collaborations happen – do you approach the musicians first or are they the ones who come to you?

Sascha: It just happens to fall into place, anything else would be rather awkward. 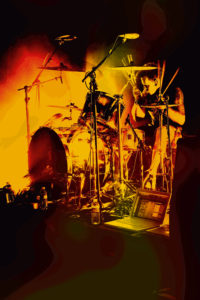 7. What about Ocelot, how did your collaboration with him come about? I remember seeing him open for you during your last US tour, but it’s only after listening to more of his music after the show that I really appreciated his performance for what it was.

Sascha: Ocelot has been doing merch for KMFDM in the past, then on the last tour one opening act fell thru and he offered to step in. It became a nightly highlight for all of us to stand by the side of the stage and watch him. Then the tour was over and we got to work on stuff, first a mix i did for a track of his, then he put some effort into KMF. We’ve been pals for years and all of a sudden he’s involved also musically. It falls into place, like i said, it has to be comfortable, otherwise it cannot work.

8. Is there anyone you haven’t worked with yet that you’d like to work with in the future?

Sascha: Not that i can think of right now… but i am sure someone will come along.

9. On the subject of collaborations, you can probably see where I’m going with this but I have to ask about it – Raymond Watts’ first appearance on a KMFDM album in 16 years… how’d that happen?

Sascha: We had been out of touch for a long time, one day he called up to shoot the shit and the next day he’d written and recorded words for a track that otherwise would have probably stayed an instrumental for a movie soundtrack or whatever. Again, rather natural how it occurred.

10. Will Raymond be collaborating with KMFDM again on a regular basis, or perhaps even tour with the band at some point, or do you see this as a one-time thing? I’m sure many of us younger/newer fans would love an opportunity to see you together on stage, but regardless of any future plans, I think it’s wonderful that the two of you are on speaking terms again after so long.

Sascha: I haven’t put any thought into this yet. Although generally speaking, as i mentioned before, i feel rather aloof when it comes to reviving older projects or collabs. There’s a time for everything and sometimes what may seem in need to be re-established, something from the days of yore, has actually become superfluous over the course of time, unnecessary perhaps, because everyone moves on, in their own way, like ships in the night 😉 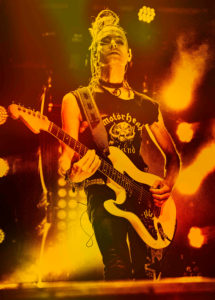 11. Of course, we can’t talk about Paradise and collaborations without talking about Andee Blacksugar. After his, quite frankly, mind-blowing performance on your last tour, I was incredibly happy that he joined the band for this album. What is it like working with him? What does he bring to the table that’s different from KMFDM’s previous guitarists (besides his impressive skills, of course)? 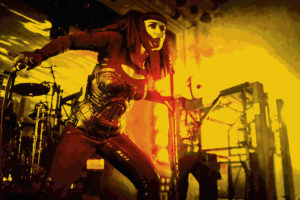 Sascha: Of course we can’t talk about PARADISE without talking about Lucia as well, because she is much more involved than it seems from the outside. For the most part her role in KMFDM is sidelined by terms like ‘vocalist’ or ‘singer’.

It should be known that she is heavily involved in the process of writing lyrics and melodies, as well as in the production and arrangement departments. The two of us work closely together and she’s as much a principal writer in the material as i am.

As for Andee Blacksugar, he was a life-saver from the get go. As it turned out, two guitarists from Germany did not get their US visas issued in time for the 2017 round of dates we had scheduled. I then called Doug Wimbish in some sort of a slight panic, asking him to recommend a guitar player that was of the highest caliber, ready and able to drop everything on the spot, learn 20+ songs in a mere 9 days ’til the first show, a headlining gig of a three-day festival run (Coldwaves Chicago), and subsequently be on the road with us for a full month.

Andee delivered. We all hit it off right from the start and he’s a pleasure to tour and work with. We even vacationed together 😉 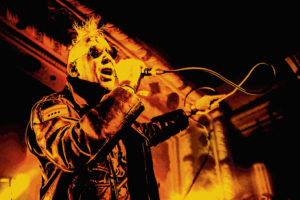 12. When KMFDM started out in 1984, it was a performance art project, and your first performance in Paris involved, among other things, playing vacuum cleaners and miners pounding the foundations of the Grand Palais. Did you ever think the band would go in the direction it ended up taking, or that it would go on as long as it has? What do you think the future has in store for KMFDM?

Sascha: That day in Paris, i wasn’t even thinking of KMFDM as a ‘band’ or anything of relevance, there was no future, no plan, no nothing. The fact that we are talking right here and now, about a time spanning 35+ years ever since that day, is due to an unforeseeable chain of coincidence and luck.

13. Another question I’m sure you expected – what are your touring plans in support of your new album?

Sascha: We are currently lining up some dates, both in Europe and the US for 2020.

14. Do you have any other musical projects in the works, or are you solely focused on KMFDM for now?