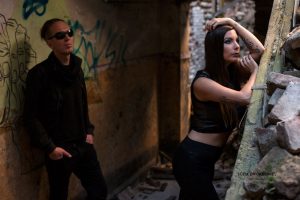 The Leopath project has been on the scene since 2007. The first CD Catsuit I – IX was produced by Jan Loewenhaupt. It was released in 2008 under the band’s own label Deep Songs Do not Sell. This release was followed by the EP Catsuit XI, XII, XIII, XV, XXI & Catsuit XII, Accoustic Version by Philips, produced again by Loewenhaupt. The single “Radio Noir” was released for the premiere of the play “Radio Noir“ at the Düsseldorfer Schauspielhaus. In 2013 the band released the Dark Hysteria CD. The Leopath sound is characterized by a combination of rhythmic phrases and dark, melancholic, and sometimes classically inspired harmonies. While several guitars were used on the first CD, Leopath’s work evolved into a more electronic sound. The songs are characterized by an aggressive feeling drawn from the industrial music. 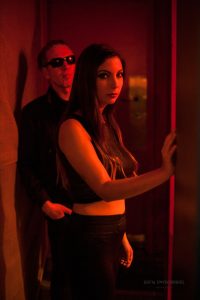 This German duo consists of Neila Fynn and Michael. Both Neila and Michael have classical music education. Neila’s first instruments were flute, piano and guitar. Soon she started playing the bass. After several collaborations which included Grausame Töchter as well, Neila joined Leopath in 2013. After the departure of the previous singer, Neila took over the role. Michael also has a classical music upbringing. He played the violin and the piano. It was later that he discovered the guitar. Soon he started discovering alternative music with bands like Coil, DAF, Nitzer Ebb, FLA, NIN, Ministry. Michael incorporated his understanding of harmony based on his classical music upbringing and rhythm and power of the industrial music he got to like over the time. Living abroad in Belgium and Spain where he discovered Flmenco, Chanson and Fado gave him the opportunity to broaden his musical horizons. Michael decided to run his own label Deep Songs Do not Sell. After recording two CDs with the band Superlopez, the band disbanded, and Michael founded the new project under the name of Leopath. After the first release where he focused mostly on film-like music, he moved into a more rhythmic direction and the singer Owl took over the vocals on Dark Hysteria. While preparing for live shows, Neila joined the band on the bass for the first time. Their common passion for industrial music combined with harmonies kept them working after Owl’s departure. The duo has just finished their latest release Collaps / Collabs after three years of work.

All photo work by Sofia Zwokbenkel