This album has a well-rounded professional production from the moment it starts. Any artist that has the confidence to start with an Intro is always worth taking time out to listen to; and I was captured from listening to that ‘Intro.’ Haunting pianos, random sounds and a slow build to an exhilarating crescendo. It sets the scene well for what is to follow.

The theatrical synths that open ‘Sex Shop’ are bold. Morgan has interesting vocals and he jumps in with a clear pronunciation of his curiosity and intrigue with shopping in a sex shop. It’s a mixture of seriousness, fun and breaking taboos. The music has a punky tang and apart from being cheeky, it’s a bright original tune. It was the first official release of Old Skin and an interesting video can be found on YouTube, released June 2018. ‘Inflexible’ is an addictive track with a thunderous drumbeat and you can find yourself humming the chorus within a few moments. There are a number of interesting sounds played throughout this track that distract your mind. The thing I’m most liking with Morgan is his 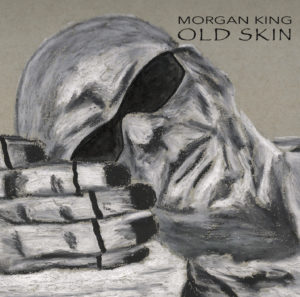 ability to dare to be different and push boundaries. The mellow ‘Stealing from the Scarecrow’ settles the album pace and gives Morgan more vocal freedom. This track is storytelling with yet more interweaving distinctive sounds. It’s a track reminiscent of either U2’s Rattle & Hum or Depeche Mode’s Ultra albums. Morgan is joined by Lene Lovich for his third release from the album: ‘Retrospective’. It’s a track full of mystery with a beautiful, slow melody. It is full of suspense, with sounds that conjure up images. It’s lonesome, it’s melancholy and yet it’s full of hope and naivety. Lene is Morgan’s shadow and her vocals compliment the lyrics wonderfully. The background wailing adds to the intensity of this powerful song. It’s a phenomenal piece. Yet again, cleverly done is the introduction to ‘Girl on the Screen’. I love this. There is something about adding sounds that you don’t often hear. As the tune continues, Morgan’s voice and the instrumentation merge. Whether it was intentional or not, the construction of this track meanders into a winding journey. Morgan has the ability to construct music that isn’t conventional. We have passed the halfway mark and each track flows perfectly into the next one. The tempo and style of each track is different. ‘The Otherside’ is another slower paced song. It’s like a growing organism, a mesmerizing theme. I’m really spellbound listening to this track. I’d be interested to learn how Morgan had the idea to create this track and if it just fell into place or was his idea from the start? It is a very complex piece. ‘Janet & John’. Immediately I am transported back to an early The Strangler’s album. It’s really fun when an artist can feel confident to add a bit of fun to his music. It starts not as seriously as the other music we have heard up until this point, but it is pertinent. It draws us in straight away. Almost sounding like a nursery rhyme. It is the 2nd track release from the album and hints again at the first release! Morgan never hints at anything seedy, I can tell he wants to tackle the subject seriously. It’s a nice simple tempo to drift along with and a very entertaining song. I love the opening of ‘Vagenda’ and I am only listening to it for the first time! This is how good this album is. It’s got many reasons to give it the attention it deserves. This must have been a very challenging album to create and everyone should give it at least one listen.

This album has a lot of appeal and should be able to capture a broad spectrum of attention. It’s not genre driven. If you like mild rock, punk, electronic or soundtrack you’ll love this. Finally, ‘Old Skin’ the tenth and last track; it is a driving tune and punctuating it’s statement immediately. Are you hanging on? It might possibly sum the whole attitude of the album and what Morgan was reflecting when he wanted to put this album together. There is no doubt, there are many undertones to this album, but both the music and lyrics are purposeful and professionally put together. It’s a true masterpiece and I will be listening to this album again and again.