A well-known name in the electro-industrial scene from the mid-80s until the end of the 90s, Numb had essentially disappeared since 1998, after founder and frontman Don Gordon’s move from his hometown of Vancouver and presumed retirement from the music scene. This year, after two decades of silence, we celebrate Numb’s return with their newest release Mortal Geometry, freshly released on August 23rd.

From the first few seconds, it becomes evident that Numb’s dark vision of the future remains present in their sound. Sinister vocals and otherwordly EBM beats combine into “Redact”, the album’s first track, and set the scene for what’s to come. The less intense but equally surreal “Hush” follows. In this second track, the vocals are truly front and center, although its instrumental finish still allow the music to shine on its own. 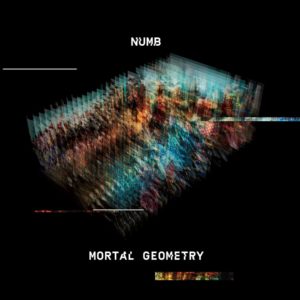 “Complicit Silence” is all but silent, starting off with a bang and holding steady until the very end, where a quiet finish sets the mood for the instrumental “The Waiting Room”. So quiet and mellow it’s almost silent compared to the songs we’ve heard so far, yet unsettlingly intense in its energy, it’s a polarizing track that makes you feel peaceful and at ease… or at least until its sudden shift mid-song, suddenly becoming so intense and loud it makes you feel like you have something to run away from. It’s like an adrenaline rush in sound form.

“How It Ends” is the sound of the end of the world accepting its fate, an almost passive realisation of what’s to come. “Summer Lawns”, another instrumental and the shortest track of the album, follows closely, an assembly of catchy EDM beats sandwiched between a bit more of the unsettling quiet that peppered the previous tracks. “When Gravity Fails”, the best track on the album in my opinion, blends equally intense beats and vocals together, neither one overshadowing the other. Don Gordon’s talent in sound design and arrangement is obvious on this album, and on this track in particular.

“Shadow Play”, the album’s longest track, is a beautifully relaxing instrumental arrangement. Its calm sound is quite a departure from what we’ve heard on this album so far. The title track “Mortal Geometry” follows a similar path, but just atmospheric enough to keep you on the edge of your seat, awaiting a triumphant finish that, once it happens, is incredibly satisfying to listen to. The album ends with “Hush (creation to negation)”, a different take on the album’s second track that’s refreshing to listen to and just as unique as the original song.

All in all, this album makes for an impressive return to the electro-industrial scene for Numb and Don Gordon, and is well worth a listen if you enjoy atmospheric electronic sounds and trance/EDM-influenced industrial music. If you want to give it a listen yourself, you can do so on Numb’s Bandcamp page. The album is available in digital, CD and vinyl formats – though the vinyl track listing is different and omits three tracks, you’ll still get all ten tracks in your downloadable copy.