From the first few seconds of the title track on this album, I could not get the smile off my face. For fans of old school PIG, not only is guitarist Steve White back in the fold for this one, but there are many similarities and references to Praise The Lard/Swining-era PIG and even to KMFDM. In case you missed out on the exclusive tour-only singles, they are here too- and better than ever, from the Militant Mix of “Mobocracy” to “The Wages Of Sin” to the “Piss and Vinegar Mix” of “Hell To Pay in the USA.” 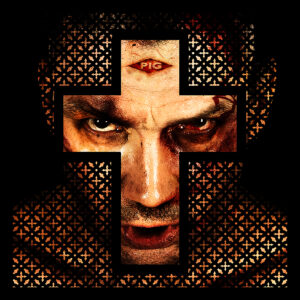 This album is pure hard-hitting rock n’ roll wrapped in Raymond Watts’ trademark sleazy electronics and alliterative lyrics which often go from a whisper to a scream in less than 60 seconds. Tracks like “Rock n Roll Refugee” and “Pain Is God” are a delight with Michelle Martinez providing backing vocals and Steve White’s epic riffs. “Badland” is a favorite of mine because it’s a total throwback to the jazz influences of Praise The Lard somewhere in the vein of “Toxico,” but packing even more of a porcine punch. With Encrico Tomasso’s trumpet holding down the groove and Watts snarling the blues, <PIG> brings the funk in a big way. Watts’ plays on words are just as witty as ever, with lines like, “The clock is crawling up to noon/judgement day is coming soon/suck it all up and Americanise/and teach your god to weaponise.” And of course I can’t forget to mention the reboot of “Kickin Ass,” with Sasha Grey contributing vocals. It’s a punchier, funkier version of the KMFDM classic, with En Esch’s lead guitar even groovier than before…I found myself singing along to the chorus as I listened (and eventually dancing in my living room because I mean, how can you not?).

Pain Is God has its darker and more somber moments, for sure. There’s the electro-grit collaboration with legendary producer  John Fryer on “Seed Of Evil” and the downtempo, Leonard Cohen-esque “Deliverance” with its plea of “Bring out your dead”. “Drugged Dangerous Damned” is bleak in its lyrical brilliance and is a riveting vocal performance. The last song, “Suffer No More” evokes a sense of redemption in a lighters-in-the-air way with its big, soulful vocals in the chorus and Bowie-esque lead vocals that made my jaw drop. How does he do it?!

Overall, this album feels very much like the upward swing of a character arc that we first saw in The Gospel, continuing in Risen, and coming to some sort of catharsis now. And yet, despite its relentlessly reflective moments, it manages to be so much fun along the way, which to me is what makes it truly great. We’re reminded again and again that behind so many of PIG’s greatest cuts (of bacon, of course) there’s always been a healthy dose of humor, whether dark or just plain bizarre. There’s something here for every “type” of <PIG> fan, from the 90s-era die-hards to the new blood, and everyone in between. And if you’re not a fan yet, this album is an excellent starting point. Especially in a year which has taken so many of us for what feels like a hellish rollercoaster ride straight into a sea of endless bullshit in which we’re all drowning as the pandemic continues to wreak havoc (not that I feel strongly about this or anything), it’s a relief to have an album where you very much get a sense that they had a great time making it- in spite of, well, everything.

I’m not sure how it’s possible for an artist to just keep getting better and better. Well, take a bow, Raymond Watts…because you’ve truly created a masterpiece. This album is awesome…get it, piggies!