The debut solo album by Markus Reinhardt is released on the 9th October 2020.

Markus Reinhardt is well known as the founder of Hamburg based hit-making synth- pop duo Wolfsheim (named after a character in The Great Gatsby). His band lit up the German charts with album releases such as ‘Spectators’ (1999) and ‘Casting Shadows’ (2003), which reached no 2 and no 1 respectively.

Reinhardt now returns with his most personal work to date as Renard and the upcoming release of a debut solo album entitled ‘Waking Up In A Different World’.

It has an apt title for our present situation we find ourselves, but without a negative outlook.

‘The Meissen Figurine’ is a great introduction to what we are going to enjoy for the next 36 minutes. Urban-Folk artist Joseh is the first guest vocalist to join Markus Reinhardt on this musical project. Searching and discovering a vocalist for a particular tune is quite an accomplishment. This pounding, driving tune is sung with conviction and passion in a solid, composed manner. It’s a wonderful haunting track with great atmosphere and strength. It grows and relentlessly so. It’s a proper foot-stomping song. 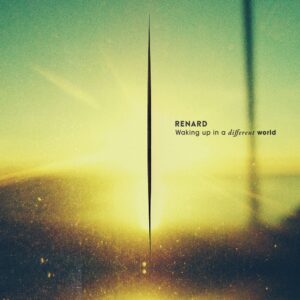 Marietta Fafouti’s strange and unique voice joins the intriguing instrumental music of the second track ‘Restless’. I am compelled to try and sing along with her from the moment I hear this. It’s a pure work of genius with such addictiveness. It’s got such raw energy and a life of its own. I am yet to play this really loud, but so far it’s a joy to listen in any mood or volume. What a song to make you forget the world we are currently living in.

‘Travel in Time’ sung by Pascal Finkenauer is the lead single from the album. It very much has an eighties vibe to the music, but Pascal’s vocals are sublime and thread a very different era to the song. It’s a simple, constructive tune, but the David Sylvian-esq vocals keep the song very regimented and solid. It’s a perfect song to continue the mood and feel of the project.

The highly distinctive voice of Sarah Blackwood can be heard on ‘Heresy’, her ethereal vocals floating between the opening guitar strings. She sings with determination and purpose as the song gets underway and the drums come crashing in. It’s another stomper of a track, with a sound close to All About Eve meeting The Mission in their early days. The song doesn’t follow the same formula as previous songs on this album and manages to drift midway into a small acoustic moment before the percussion comes thudding in again.

‘Hotel’ features Marian Gold on vocal duties. What an honour to have the long time lead singer of Alphaville join Reinhardt. The song unwinds with a lonely synth and joined by percussion as Marian begins to unravel the tale of the hotel. It’s a song of emotion and it picks up pace subtly. It’s a rhythmic, atmospheric song with a haunting nature.

Eliza Hiscox enchants on ‘My Heart’s Still Shaking’, a very hip and energetic song. It’s got sounds that you haven’t heard before and Eliza is yet another singer with her own sound. The song is quite mesmerising and feels a little like something Malcolm McLaren would envy. It’s another very clever, addictive song.

Marian Gold is back for the seventh song ‘Damn Happy’. His vocals and the lyrics have a mixture of humour within. It’s a kind of ironic song, but only someone like Marian could probably make this song work. The music sits firmly in the background, allowing for prominent vocals that sound occasionally Bowie-esq. It’s a very warm song, even though it probably shouldn’t be. It’s a song to digest and see if you can unlock the code.

Joseh similarly returns for his second song ‘Junkyards’ and is perfect for his voice. The song is so uplifting and joyous. The music throughout this album is a mixture of ambient, mysterious, dark and subtle. It’s complex music that’s both addictive and yet seems to dissolve with the vocals. It’s a talent that I haven’t recognised before.

The ninth and final track is called ‘Intelligent Design’ and I can safely say that every time I get to this track I am getting a little sad the musical journey is nearly over. The mixture of music and talent throughout this album is like being showered with such creativeness and positivity. The final track is a pleasant instrumental piece that can finally shine some attention on Markus Reinhardt. It’s a dreamy, sombre piece that cascades through a landscape of light and dark. It’s magnificently done.

I strongly urge those who are finding good music hard to discover to turn their attention to this album.

Full credit to this album, I am already waiting for the follow-up.