It’s always good to know that there are other artists out there that appreciate the music of Tangerine Dream and Rodney Orpheus is one of these. He formed the electronic rock group The Cassandra Complex in 1980. After a period of time releasing remastered albums from The Cassandra Complex, Rodney has released a new solo ambient album, Places Beginning with N. He expresses with his own words that with this album he wishes to tell stories with sound only. It begins like opening up a musical box and your ears are serenaded with a gentle, rhythmic lull. It’s so joyous and simple, but instantly puts you into a calm and relaxed state. The first track is called “Nuit”, a shorter track that wishes to project images of the night sky. I think Rodney purposely wants us to see his visions within this album. I believe we do hear tiny strands of an 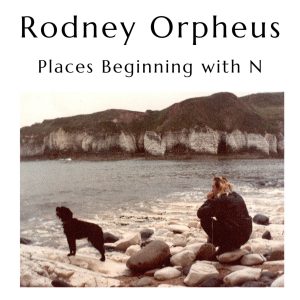 oriental feel with “Nagasaki”, but the image that I see upon hearing this tune is of bliss, not a ruined and bombed city. I feel that I am discovering a place that is rebuilding and nature is coming back. It’s a very serene tune and compliments “Nuit” on the album’s intended ambient journey. The deep chords that start “New Town” however reflect a different sense. I feel intrepid and vulnerable as the piano carries away. It’s a much more raw tune and I see grey concrete walls and feel despair as the track meanders on. I feel that I have arrived in a new futuristic town where the architect has made sure everything is grey and everything is square and box shape. It’s a lonely track that made me feel of isolation. It certainly puts you into an interesting mood. “Near to the Heart” is a labour of love. It’s a fifteen-minute track that laments and wanders. The sound generated is not of one emotion. You can feel bright and breezy one minute with hope and wonder, then as the tune carries on feel that it’s enchanting and surreal. It’s a very perplexing and resonating sound to have in the background if you want to meditate and chill. “Next to Nothing” is the shortest track on the album and provides a nice little join. It has its own character and fits well within the structure of the album and leads nicely to the final and longest track. I feel that the second half of this album is best listened to if you want to put your feet up and have a glass of wine and let your mind wander away from the drudgery of life. There is no doubt that “Never-Never Land” is going to massage your mind. Being just over 24 minutes long, it has the ability to give you a sense that you can take yourself anywhere spiritually. It has a very gentle, rhythmic flow and I am certain you can waft off to any place within yourself if you allow the music to take you over. Maybe it has the clarity to identify with your soul? A well crafted piece. I feel that to get the best out of this album is to put aside time and listen to it in full.