After his outstanding 2018 album The Outsider In The Mirrors, Soft Riot has surprised us with another brilliant release. When Push Comes To Shove is the seventh studio album by the Glasgow based Canadian artist JJD, who goes by the stage name of Soft Riot.

Jack continues the tradition of writing synth-pop danceable songs that aren’t necessarily as poppy as one would imagine. There’s more to his vision of synth-pop; it comes with a dark twist, it’s minimalistic and, at times, reminiscent of italo disco. Although you may recognize some 80s influences, his work sounds surprisingly futuristic and experimental. JJD often speaks about the feelings of isolation, alienation, anxiety and paranoia, but he delivers these ideas with his recognisable sense of dark humour; the lyrics vary from abstract themes to a very personal dimension. Humour is a tool Jack employs skilfully; you can find it in his synth arrangements as well. 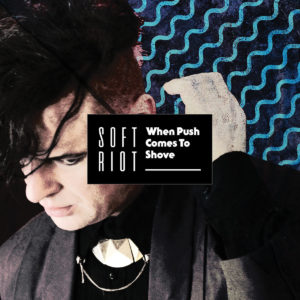 If you’re listening to Soft Riot for the first time, this release can take you by surprise; it’s genuine work of art and you won’t be able to pin-point the sound as a specific genre, but rather as a mix of elements from many different music inspirations. However, if you’ve been following Jack’s work, you’ll find that the album is a logical continuation of his previous work, as he further explores subjects of his interest both lyrically and music-wise. If you listen closely, you can find details of musical phrases and lyrics that have been used in previously released material. Even if “it’s all been done before”, this album captures the listener’s attention with its freshness and new approach of familiar ideas. I wouldn’t call it “recycled”, as Jack uses a brand new concept, which is a concept of “deja vu”.

The album starts with the darker “Taking Off The Edge” and “It’s No Laughing Matter”, which rely more on the beat than the melody, while “The Lost Weekend” offers a more poppy feel. The album has a natural flow and can be viewed as a complete work rather than just a collection of songs, despite the fact that it is so diverse in its content. The second half of the album is where the “deja vu” idea becomes more evident. If you listen closely, you can find it in the song structures and synth arrangements. “By The Skin Of Your Teeth” has amazing dance floor potential and an inviting bass line. The atmospheric “Don’t Get Yourself Bent Out Of Shape”, the utterly catchy “Heads Turn Around” and the melodic “Your Work Is Never Done” are some of the best songs Soft Riot has ever produced; absolutely delightful synth melodies are like the sweetest earworm! Even though one can call his music minimal synth-pop, Jack’s work is anything but minimal; synth riffs intertwine beautifully and weave the delicate fabric of an utterly intriguing soundscape. If you’re looking for something to dance to, or just chill to, this album is a must-have. Hats down to Soft Riot for When Push Comes To Shove!