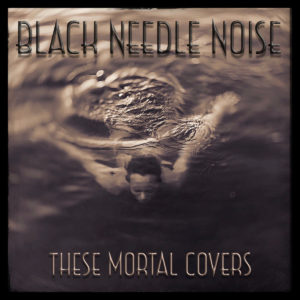 The past few months have been relentlessly productive for legendary dark alternative producer John Fryer’s band Black Needle Noise. On the heels of their World Tour Of Hollywood this past fall, came the vinyl release of the long-awaited Lost In Reflections, the launch of the Black Needle Noise website, and now an upcoming album of cover songs called These Mortal Covers. The album contains a collection of songs that have been in development for years, with the disclaimer that “more songs will be added as time flows by.”

After seeing them twice on their World Tour Of Hollywood for a very moving and dreamlike experience, I had the pleasure of catching up with Black Needle Noise singers and collaborators Anjela and Betty X to tell us more about themselves and the music.

An Interview With Anjela Piccard

1. Black Needle Noise just wrapped up the World Tour Of Hollywood. What was that like for you?

[APf]: It was like waking up from the most inspirational dream. You are not quite sure you were really there; eyes bright with bewilderment, skin still moist with heat, energy surging through every capillary, heart every bit a flutter. It is not until you see the photos that you realize that it was indeed in real-time. Those stages are the personal temple that exalts all that dwells within; I suppose in 2 words fucking brilliant! Being a part of the October 13th LOST IN REFLECTIONS vinyl album pre-release tour will always hold a unique and precious memory for me.

2. How did you and John end up meeting and working together? 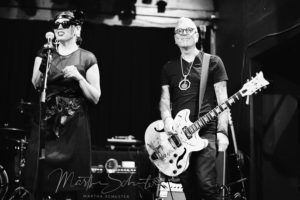 over swaggers this silver haired gentleman with an approach. In no way did i know who John was. All I knew was that he: 1. wouldn’t leave me alone, 2. asked if I would be his future widow. Keep in mind I wear a black widow on my hat as a clear warning to all forms of lurkers. It seemed to be more of an enticement with him and less of a repellent. All that being said we have been together everyday and night since. Yes, every day and night. John was DJing for our friend Dan Santoni’s (artist & photographer) birthday party, as it turns out. John asked me to please stay and watch him perform. I liked the way he looked from behind; I have always felt if you like the way they look leaving you, you are guaranteed to appreciate them coming back. So there we were, two lovely souls and an incredible amount of potential. I suppose some people are just destined to fall in love, and in our case that relationship leads to graveyards and a career. 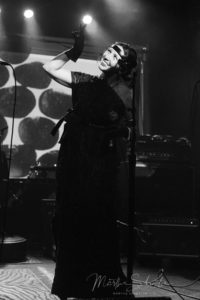 3. Do you have any sort of formal background as a singer/musician? You have a style reminiscent of 1920s cabaret/jazz singers, where does that come from?

[APf]: Briefly I attended music school for engineering before arriving to Los Angeles. As for the jazz singer style it seems to clearly be in my DNA; collecting vinyl and emerging myself at a young age into the feel of jazz culture. After all is it not one of Americas most vital exports <insert a smile and mischievous eyes sparkle here>.

[APf]: The entire set list! Honestly it’s not possible to say one more than the next; it’s like having amazing friends. You appreciate them all and sometimes your communication is simply next level at certain periods of time. Magic happens on that stage and in the studio; it takes every nuance of existent to make that magic happen. To express the purity even in its raw or dirtiest form is otherworldly.

5. Betty said she has a visual arts background and I think you said you do as well…tell us more about that.

[APf]: Yes that is true. I started as a strange child and an outsider artist which lead me further along the path of destiny; managed to spend many years in the art business as a gallery manager of Planet Rooth Studios, a director of galleries at White Box Contemporary and the artist in residence programs. I am fortunate to have worked in domestic and international artist relations, everything from art basel to your local farmers market. It resides in the marrow of my bones; art be it fashion music installation film cuisine or the realization of the mind body connection. For some it is not an option and it is all consuming. Having these experiences and relationships is an honour and in many regards what has shaped the creature I am before you today. 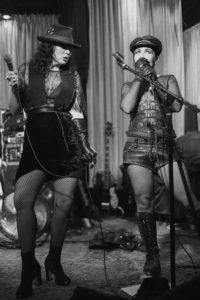 6. Who are some other musicians you’ve worked with and/or would like to work with?

[Apf]: It has been an honour to perform alongside John Fryer, Sean Haezebrouck and Betty X. Betty X and I have a special connection on stage; it is magnetic vital and tantalizing and i feel like the fans can feel that pour out of us when we perform. Currently John and I just finished a cover of T.S.O.L.’s “Blackmagic” released October 31st on THESE MORTAL COVERS, just in time for the Halloween and Dia De Los Muertos celebrations. There are so many talented artist i would love to work with, all of the Black Needle Noise collaborators. As for other artists, many, many, many. It is a big and small planet we all share; let’s just play and see what happens has been my vision since my mother’s birth canal. Who would you like to see and hear me play with? For now I would like everyone to enjoy our latest release. It is available on vinyl even. What’s not to adore?

An Interview With Betty X

1. As a new fan, what’s a good place to start with your own discography? Which songs do you think say the most about who you are as a musician, lyrically and/or instrumentally?

Betty X: My first album Salon Betty and the Big Hair Sex Circus is the best place to start.

“Last Cigarette” is one of the first songs I wrote in my first project, Salon Betty.

Memoirs of a Pain Junkie is my favorite album from the more aggressive material I’ve worked on over the years. It was a cathartic, visceral exorcism.

On my last album, Bad Juju, “Watchers on the Threshold” is sort of an amalgamation of my swanky earlier material and the more aggressive stuff. It’s based on a true paranormal experience that I cannot quite explain. 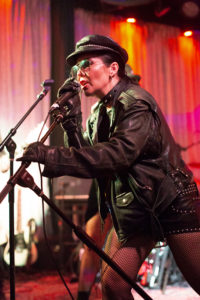 2. Prior to your latest work with Black Needle Noise, you covered Soft Cell (your version of “Sex Dwarf” is so glitchy and cool, I love it!), paid homage to Twin Peaks/Angelo Badalamenti, and you’ve worked with industrial superstars like Martin Atkins (Pigface/Killing Joke/PIL/Invisible Records), Steven Seibold (Hate Dept/Standalone/Seibold The Terrible), and Al Jourgensen (Ministry/Revolting Cocks/1000 Homo DJs/Pailhead/PTP/Acid Horse/etc etc!). How did all these collaborations come about and what’s it like working with those guys?

Betty X: “Sex Dwarf” was a collaboration with producer Vinnie Saletto (Genitorturers) and myself.

I had always wanted to cover it and almost did with my first band, but it never came to fruition until that point. I love the version Vinnie and I did! He was the perfect person to collaborate on it with considering his background of electronic dance music.

I met Martin Atkins in the 90s but it wasn’t until the 2000s I started to work with him on music. The first collaboration was the re-mix Atkins/Steven Seibold made of my song “Shoot ‘Em Up.” I also was a guest vocalist on a few PIGFACE shows in Seattle, and will take the stage again in November for two Texas dates. Nov 24th, Dallas and Nov 25th in Austin. It’s easy to work with Martin. I feel like we’re on the same page with our punk rock DIY approach to music.

On Bad Juju, I wanted to pay homage to David Lynch and Angelo Badalamenti and I also wanted to challenge myself vocally. We recorded “The Nightingale” and tried to stay as true as possible for a vintage sound. It’s strange that this album, the one that isn’t industrial-metal, was the one that Al wanted to help co-produce after hearing “The Kingdom of Heaven.”

3. I can tell, especially on your album Bad Juju, that a lot of your songs are influenced by jazz/blues/cabaret. Who are some of your favorite artists in these genres? I love the sax on “Watcher On The Threshold!” Do you have any formal background or training as a jazz singer or anything like that? 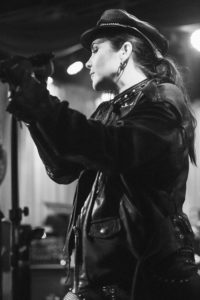 Betty X: Jane Rodriguez (Revolting Cocks) played sax on “Watchers On the Threshold”, but if you listen very carefully, the sax fades into my banshee shrieks.

No formal training, just a few singing/music/performance art classes at Cornish College of the Arts. My main focus was Performance Art/Interdisciplinary/Mixed Media, not singing, ironically. So, I consider myself more of a conceptual artist than a trained singer.

4. The message behind the Black Needle Noise track “Social Media Disease” is pretty blatant and pretty important in this day and age. How do you handle social media presence as an artist? I feel like it’s really done a number on the way people interact with each other, it’s created this sort of heightened sense of urgency and “must-have/must-see” when it comes to things like entertainment [movies, music, and TV]… and as you stated in your lyrics, it seems to have made a lot of people really selfish and shallow. Yet it also seems to be a necessary evil. What do you think? Is there a middle ground?

Betty X: It’s a tough one. You need a balance because you can become completely overwhelmed as an artist when you must also be your own promoter, social media manager, and run your own business. I personally think there’s just way “TMI” on social media with some artists that are on there 24/7 taking selfies non-stop. Too much information overload.

But yes, social media is a medium just like any other medium. One must exercise caution and moderation, which is difficult because it is designed to hook you and keep you addicted, to feed this need to stay connected and seek validation for everything.

I just think it’s important for an artist to have frequent off-grid breaks so they can hyper-focus on creating art without outside influences and distractions. 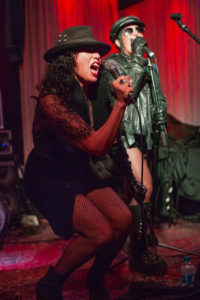 5. Black Needle Noise just wrapped up the World Tour Of Hollywood. What was that like for you? I thought it was really cool to have both you and Anjela singing, with John and Sean backing you up but really making the vocals more prominent. It gave the shows a sort of retro feel, you know, like how all the old Motown songs from the 60s really emphasized the vocals, especially in a lot of the “girl groups.” How did that concept come about? And were any other singers involved on the tour? Is this something you’d maybe try again on a larger scale (i.e. multiple cities)?

Betty X: It’s all John’s idea. I love singing with Anjela, she has a magical voice, very sultry and jazzy from the 20’s era.

On this last tour, it was just Anjela and myself singing, but we plan on other guest singers joining in when Black Needle Noise does future tours. There were other vocalists booked for the World Tour of Hollywood, but due to personal reasons, they couldn’t make it, unfortunately. 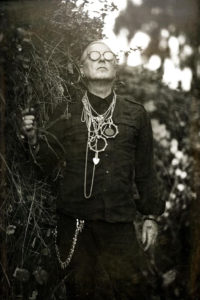 6. How did you end up connecting with John/Black Needle Noise in the first place? Do you think you’ll do more songs with him?

Betty X: It was all so mysterious. He contacted me on Facebook, social media of all places, gasp! And yes, that’s a good thing.

Absolutely. I was honored that he reached out to collaborate with me. I’d love to record more songs with him especially a Twin Peaks/Lynchian inspired one next.

Pics and artwork by Martha Schuster (I See The Moon Photography)