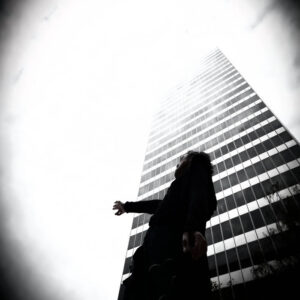 The Dramedy at its core is Dave Dramedy himself, although on this album he’s recruited quite a few extremely talented musicians–and it shows. You would have never guessed that it was recorded in isolation. And The Light Goes White starts off with “Vow”, a perfect opener. The delicate acoustic guitars highlight the strength of the doubled vocals, which build up to a chant. The song evolves into a gritty, heartfelt rock anthem with big guitars, huge drums, and howling background vocals. Almost immediately there’s a darkness underneath the whole album, from the Stooges-esque vocals to the heavy, reverberant drums and lyrics of struggle and loss. “Parasite” is a catchy post-punk number with driving guitars reminiscent of The Cure, complemented by frantic drums and a rumbling bass line. The drums lend the album a striking darkwave edge and tie the album together quite well along with Dave’s vocals, which are unapologetically raw with emotion and right in your face. In this day and age of playing it safe and polishing production to the point where the impact is sometimes lost, it’s a breath of fresh air. Another standout is “Popsicle,” which has a little bit of a lighter vibe and more of a snotty punk feel, complete with a gang-vocal chorus.

For all its relentless energy, And The Light Goes White does have its slower, sweeter moments, like the forlorn ballad “Waiting On You,” which is accompanied by a whimsical cartoon music video. Many of the songs on the album feel very personal, yet the lyrical themes are relatable, such as the fist-pumping fuck-you “What’s Left To Say?” with the chorus, “And we’re buried again…buried over again” as we lament love lost and trust broken (the boy band-esque “oooh” chorus is delightfully ironic in this case). The last track, “All Our Yesterdays,” features singer/songwriter Caroline Blind, whose band featured Dave on acoustic guitar and bass during their 2018 tour. Her vocals layer beautifully with Dave’s to create the sort of song where if we were able to go to concerts again, we’d all put our lighters in the air (well, maybe nowadays our phones…).

Dave’s musical influences are far and wide, and sometimes obvious but in a very endearing and authentic way. And yet, never once does the album feel derivative or cliche. The result gives us a really fresh and really real take on guitar-driven alternative rock which I personally haven’t really heard much in the past 10 or maybe even 20 years. It’s rare these days to stumble on an album that can pull off the slow songs just as well as the ones that really rock. It’s rarer still to hear from a band that manages to pay homage to so many genres from the days when “alternative rock” was new, yet in a way that achieves a sort of timelessness. If you too are craving alternative rock that really does rock, pick this up and give it a listen…if you play it loud enough, you might even get the neighbors to bang on the wall like mine did. 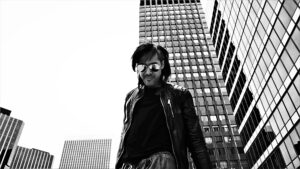