Ever since seeing Thorsten Quaeschning’s solo performance in Berlin, January 2019 it was amazing to see what the man could do separately from Tangerine Dream or Picture Palace Music. Paul Frick was there too, performing a solo & also joining Thorsten & Hoshiko for a jam. Thorsten literally blew us away that night. I’m still waiting patiently to see if this music was recorded, saved safely and it will have a possible release in the future! In May 2019, ‘The Munich Session’ came about and later on in September 2019 ‘The Seaside Stage Sessions’ with Paul Frick. So Mr. Quaeschning has been busy! He also has the ability to produce some wonderful soundscapes. I will start my review in reverse 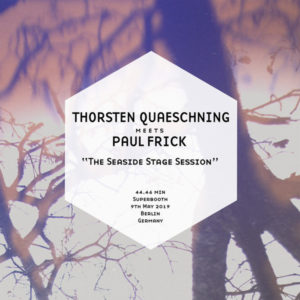 order. ‘The Seaside Stage Sessions’ with Paul Frick. There is 8 parts to this seamless album. Who doesn’t like an album that comes in parts? It seems like it’s a tradition with electronic music. Upon hearing this album for the first time, possibly through sleepy ears and no concentration, it started and finished and I didn’t think I had any thought or emotion about it. But when I listened to this album the second time, more awake and conscious, I was utterly surprised that I had somehow made such a bad judgment call in not recognizing what an amazing album this is upon that first listen. When a present member of TD breaks away and is able to make music that isn’t TD, that’s interesting. I was really looking forward to seeing what Thorsten could achieve with his own albums, especially thinking of that composition in Berlin. Even now, when I listen to ‘The Seaside Stage Session’ I hear things I didn’t hear before. It’s a methodical piece of work. It’s intricate, detailed, spellbinding and relentless. It hits peaks and troughs, it worms its way along meandering paths and the textures and layers are fascinating. I’m sure that both Thorsten & Paul were at the height of their skill-set and knowledge when concentrating on this meticulous journey. One thing is for sure; they worked extremely well together and produced a wonderful album. It’s exciting & refreshing. Is it a work of art? For sure it is and deserves proper intensive listening. The music is for absorbing, to release tension, to feel exhilarated and make you feel alive. I love the fact that the parts flow easily into one another. I’m not so sure if they play well as stand-alone tracks, but that’s because I do take pride in listening to an album in consecutive order, as the artist/s probably wanted the listener to hear it. Overall the whole 45 minutes of music is light and bright. We have a wonderful spell towards the latter part of the album where we are introduced to wonderful guitar solo threading into piano play that works so well. It’s a multilayered collaborative piece of music that I am glad that I got to purchase, listen to properly and write a review about. Now I will return to Thorsten’s ‘The Munich Session’ We have a full set here of 55 minutes that spans the length of the album. Something that does reflect the ambitious era of Tangerine Dream when they possibly had to split an album and call the sections part 1 & 2 because CD’s or downloads were not available and they had to fit the music on both sides of the LP or cassette. Having the ability to record long pieces of music in one length is one advantage of the technology we have today. ‘The Munich Session’ is a journey. It does come close to something Tangerine Dream would play or would have played. So my theory is that Thorsten is the musician that carries forward that depth of TD. It’s not a dissimilar trait to the one Edgar Froese had. Edgar would produce solo albums and the distinction between one of his solo albums or a TD album wasn’t that dissimilar. So am I in a quandary? From a personal level I’m not, 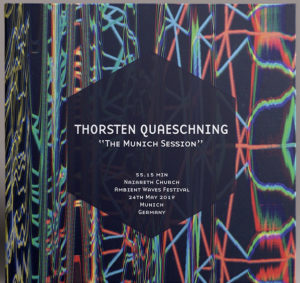 because somebody has to be able to carry the legacy on if Tangerine Dream are to have a future. Maybe the culmination of the musicians we have in TD now is the reason that the group can produce stunning new works and sounds that were stifled in the late 90’s and the early millennium. So, what is ‘The Munich Session’ in sound? It’s another uplifting piece that meanders along a fairly straightforward path, safely supported by sequencers and minimal synths creating thin layers and textures up until the midpoint of the track. Then we reach a lull whereby the only thread connecting the first section to the second is a soft drumbeat. Small sound effects, tempo and faster sequencers build and we’re heading away from wherever we’ve been. We now have promise of something more. We have energy, hope and direction. This lasts for around ten minutes until it reaches a crescendo and the music swoops back into a more somber affair. There are lots of sounds you will hear that do remind you very much of early TD. It is thinly layered, without a melody and the sounds are just carried along until scattered piano keys play an array of notes, scattered amongst the floating harmony. The piano fades and new, higher speed sequencers are reintroduced as we coast towards the end of our magical, inventive journey. Two different spellbinding albums that shine and show us what Thorsten Quaeschning has the ability to do. I’m impressed and have discovered a lot from listening to both of these albums. Very well done and much appreciated. I just need to purchase that music performed in Berlin in January!