Recently I had the pleasure of sitting down with Raymond Watts of PIG (even though I actually emailed him instead…just use your imagination!) for some bacon-flavored banter about his new album, Pain Is God. You can get it here if you haven’t yet!

Quick question about “Badland” to start…first of all, this song is definitely one of my favorites of the whole album (although it’s hard to choose…)! I was wondering, is the title a play on that Weather Report jazz song “Birdland” or is it just coincidence?

First off, let me say how nice it is to be talking to you Adrian. In answer to your question, Badland refers to the current climate we’re living in as a metaphor, not a physical place. And I’m not referring to the year 2020 with all its trials and tribulations, but what seems to me to be the dawning of a new dark age in which bullshit is the new belief, and facts are to be burnt at the stake of bigotry, fear, xenophobia and hatred …while patriotic paranoia wraps itself in the flag of fundamental and god fearing religion. Oh, and certainly not the Weather Report song! 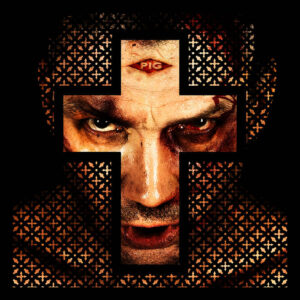 I also could’ve sworn I heard a little bit of an homage to “Fetid Air” or maybe that was wishful thinking? Having said that, I know you’ve mentioned being into combining different genres, i.e. Latin jazz and the like. Who are some of your favourite musicians outside of the industrial world?

I didn’t put in any references to Fetid Air (though I’m not averse to doing that kind of thing) and I do like to move from one genre to the next, sometimes within one piece.

I don’t have a set of ‘favourite’ musicians. It tends to be a constantly swirling cast of characters who change by the hour or day. Recently I’ve been listening to The Durutti Column, Frank Zappa, Atom TM, Richard Strauss and Scott Walker.

One of the things that strikes me immediately about this album is how you guys just seem like you had so much fun making it (feel free to correct me, haha!). Of course it has its serious moments but it’s really just…a rock n’ roll album at its core. In fact, on “Suffer No More” your vocal delivery reminds me a little bit of David Bowie. So I gotta ask, if PIG could do a Bowie cover, which song would you pick?

I’m glad you think of ‘Pain Is God’ as a rock n roll album. At last PIG is free of the ‘industrial’ label, surely one of the most incorrectly attached tags in musical history! And you are right, some of the album was fun making, but not more so than the others, mostly it can be quite an ordeal. I really don’t know if I could do justice to a Bowie cover! I suppose the one I’d make the least mess of … though he left such a huge and fabulous body of work do we really need any other versions? 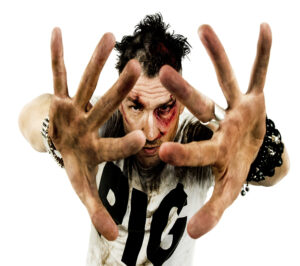 It’s great to see Steve White contributing his guitar chops to Pain Is God…he’s very versatile and it shows! You’ve been working together since the 90s…did he come up with anything in particular for this album that really brought it to another level, as far as the guitar parts?

I’ve been lucky to have some outstandingly creative guitarists on various PIG albums, but Steve brings something that both fits and fertilises it. He can shred and crunch with the best of them, but I hear his motifs and solos as if someone was singing them in my head. It’s weird. After the tour with 3Teeth here in February he stayed in London and put the bulk of his parts down but the solos he recorded in Seattle, and it’s without doubt his best work. Like a well cured sausage he’s got tastier, with more depth and flavour over time.

As someone who’s no stranger to head injuries, the album cover art made me wince! Whose idea was that?

It just came to me that it was the right look for the cover. The image is maybe a reference to Sinsation, and where I’ve been through the years, or it might be a more general commentary. I had a very specific idea of how I wanted it to look, discussed it with Vlad and Gabriel (PIG designer and photographer/videographer) and we worked on making it happen. I was quite exacting about the make-up, then Gabriel would shoot a bunch of photos that we’d have to look at to see if they fitted perfectly on the crucifix. It took a few attempts but we got it and I’m really happy with the result.

Working that way is an example of knowing what I want and others in the PIG camp helping manifest it, but the video for ‘Rock N Roll Refugee’ is the other way round. I had a chat with Gabriel [Edvy], and with the raw footage she created the complete look and brought the glam to the grit and the pop art to the PIG. Likewise with Vlad [McNeally], we brainstorm and he comes back with something that goes further and is more fantastic than what we wheeled into the operating theatre together….he comes out with a brand new monster. 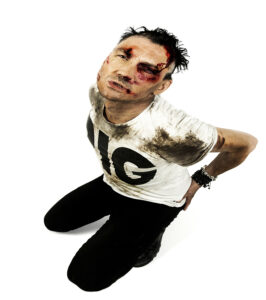 A lot of fans are thrilled (including me!) that you redid “Kickin Ass”… I love what this newer version has brought to the album, from Sasha Grey’s vocals to En Esch’s guitars. I know you mentioned in other interviews that <PIG> played it live a few tours ago, but when you rerecorded it, how much of the original backing tracks were used? I realize this is sort of a nerdy question but as someone who’s also an old school KMFDM fan, I always wonder about stuff like that…

I only kept the tempo of the original and rebuilt everything from scratch, putting it all together and letting myself loose on the guitars, which was fun, except for those wickedly tricky wah wah parts!. En Esch then did some vocals and guitar licks before Sasha did her vocal parts.

I’m glad you like it as I wanted it be quite close to the original, which is a kind of perfect intersection of my writing with KMFDM and PIG. Back when we wrote it I put part of the chorus of the PIG song ‘Shit For Brains’ into ‘Kickin Ass’, so it kind of inhabits that space that makes it especially relevant when I’m working with En Esch. 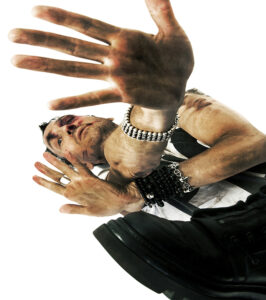 When I interviewed you and Giles a couple of years ago right after Risen came out, I asked if there would maybe be a remix album coming out. If I recall correctly, the answer was a cryptic “Maaaaybeeee…” And then Stripped & Whipped appeared and we were blessed! So, do you think Pain Is God might have a similar companion volume at some point?

I’ve got some fabulously interesting remixes from people which show a frightening level of creativity! We’ll get them out at some point next year.

Obviously the pandemic has done a number on all of us for various reasons. As a fellow musician, I’ve sort of developed this defense mechanism of being productive for the sake of distraction. (I don’t know how healthy that is..!) How about in the <PIG> camp? When the lockdowns first started back in March, how did that affect your plans for the year? Did you find it hard to regroup and redirect, or did you find it more useful to just kinda keep pushing through?

I was lucky that I was already knee deep in the album when the pandemic really arrived. Luckily, writing and recording become quite all encompassing for me, so I was able to to focus my anxiety, angst and apprehension in the studio and not by bulk buying toilet paper!! (new merch idea? -ed.)

Nothing along those lines at the moment.

Final words of wisdom from the Lord of Lard to get us through these uncertain times?

Don’t fall to expectations, rise up to new damnations.

As always, thank you Mr. Watts for all you do!